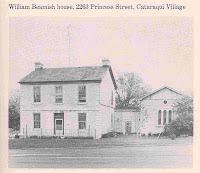 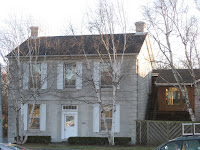 During the past few weeks, I have spent time in Kingston, while my buddy attended appointments and spent some time in the care of the good folk at KGH. Admittedly, most of the time I had with 'the old stones of Kingston' was spent driving past them looking for a *#@@##*!! parking place, but I was reminded of the richness of Kingston's built heritage and drawn to explore some of its history on my return to my study carrel at Belleville Public Library. At the moment I am browsing online resources by Jennifer McKendry while from the library I am enjoying Margaret Angus' The Old Stones of Kingston published back in 1966. I was delighted to read the following in her acknowledgements: "Anthony Adamson and Marion MacRae are responsible for my interest in architectural history but not for any errors I may have made in judgment or fact..." Ditto.
The Old Stones of Kingston salutes the buildings before 1867. Fortunately, enough of them still survived in 1966 to make the book worth the undertaking! ...and well worth seeking out through my favourite used bookseller. I am almost apprehensive about tossing the book and my camera into the back seat and heading back to Kingston to search them out today - will they still be there, solid and dour?
The house above is in old Cataraqui village - if you have old house instincts you can still feel the old village among the car dealers, mall sprawl and 6 lane commuter roads....I had to stand in the middle of a busy street in front of a Tim Horton's to get even this not very satisfactory shot of a fine old ashlar stone home (with its not so sympathetic redwood addition..)
McBurney and Byers show the above old photo of the house in Homesteads (1979). The house was reported to have been built in 1859 for William Beamish, who may have been a doctor at the penitentiary. The house was built of stone quarried in Collins Bay by convicts, through the 'prison worker contract system'. In fact, many old stones in Kingston, Portsmouth especially, were built by convict labour. The famous Church of the Good Thief is one of them. I shall return with more photos in spring when my friend Brenda and I plan a day-trip.
Posted by Ancestral Roofs at 2:54 PM