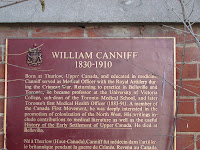 I like Cannifton a lot. Cannifton is a little village north of Belleville, unassuming at first glance. But Cannifton's got a lot going for it...not the least of which is a lot of links with local history. At the present time the Hastings Heritage Centre resides there in the former township office. On the wall outside this plaque is proudly displayed. The plaque honours William Canniff, who had a brilliant career in medicine in the second half of the c.19. William Canniff was also an historian contributing the History of the Early Settlement of Upper Canada, a hugely important source for historical researchers. I'm still working on where he fits into the pioneer Canniff family. (By the way, I learned the entire book is available free on  Googlebooks - it's so ironic to read electronically the fuzzy old hand-set type of a book first published in 1869)

But of course, I like Cannifton because of its buildings as well as its history...indeed, they are one. Situated as it is on the Moira River, which tumbles over shelves of limestone on the way to the Bay of Quinte, it is not surprising that a lot of Cannifton's early buildings are of stone. Of special interest are several associated with the founders of the town, the Canniff family. 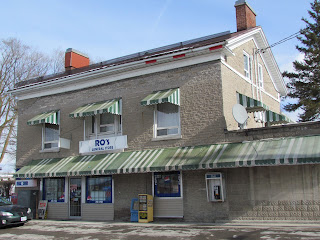 Some time after 1806, John Canniff, the community's founder had begun to clear land in the area. His family built a dam, a sawmill and a flouring mill at the site of the present village, and a stone house. Canniff's Mills was at one time Thurlow township's largest village, the junction of all the area's roads and the link to the north in the 1830's. John Canniff came from Dutchess County N.Y. (as did my mother's people), joining other Loyalists in the move northward. In 1815 it is reported that there were only two houses in the area - one was John Canniff's, reported by my building researcher friend Lois to be the white house (stone beneath the stucco) pictured at the bottom...I think it may be the building mentioned as son Daniel's inn at one time.

John Canniff's two sons Daniel and Joseph  continued the work of empire building. Sometime after 1820, Joseph crossed to the east side of the river and built a grist mill and saw mill. Cannifton was at its peak in 1860. It's said that there were 90 people with the name of Canniff living in the area at that time.

The store with living accommodations above (photo above) was built by Joseph Canniff for his son John. Joseph's home is the lovely Regency style stone farmhouse immediately to the north of the store (shown below). Mary Plumpton's 1967 history The Rambling River features an archival photograph of the store taken around 1880. The store was once Windsor's Store (1880's) and was also run by Washington Palmer. Today it is operated by a Mr. Jason Ro, a lovely person whom I interviewed today for a Country Roads article on general stores. 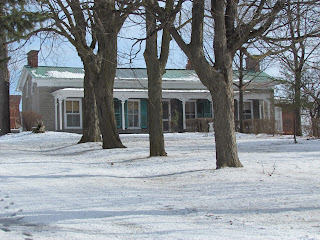 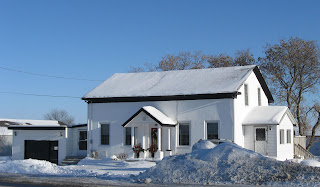 Cannifton also has some amazing trapezoidal stone houses that I must get a photo of soon...waiting for the right light. And for all the cars to go home. There's also a hugely picturesque little stone barn.

Lois the building lady just gave me the name of the folks who live in the stone cottage with the beautifully restored verandah. They are passionately interested in the history of the village. Suspect I'll be inviting myself for a chat someday soon. 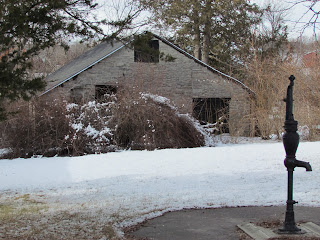 In the meantime, if you can, go to Cannifton. Don't speed through on your way to Walmart or the subdivision sprawling to the north. Stop a bit. Look at the river, see where the stone for the village came from. Think about the time before the old stone store, about the time when building a sawmill and a flouring mill meant the beginning of a settlement's success. When a general store was the place you went for vital news and human contact, not just a lottery ticket.
Posted by Ancestral Roofs at 6:09 PM