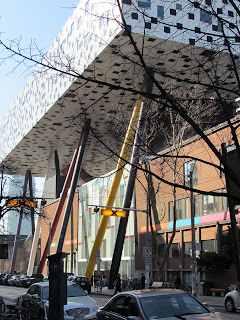 If I lived in Toronto, and I was feeling glum and curmudgeonly, I would walk down McCaul Street. This absolutely silly building,
and the self-consciously arty antics  of the wonderful college kids  who decorate its sidewalks would lift my mood immediately.

What a structure! - primary coloured pencil-like pillars supporting a checkerboard pillbox designed by Alsop Architects of UK. Looks like a spotted alien hovering above the park, the multi-coloured Victorian home next door and (mercifully) the little green park. 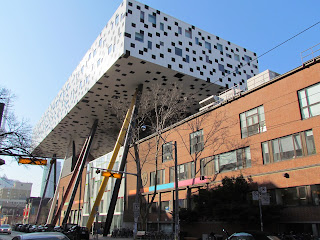 And a bit of history:
1921 - the Ontario College of Art opens its first building, the august structure which sits just east of the Grange, and makes a matched pair with it.
1957 - the main campus opens at 100 McCaul, an extension of the original Grange wing. Finally... all departments finally under one roof. I expect the trillium plaque below dates from that time. 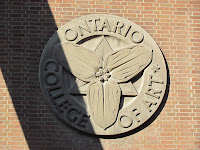 Then, with a grand flourish, The Sharp Centre for Design was opened in 2004. The name was a no-brainer...OCAD alumna Rosalie Sharp and her husband (you may have heard of them, they founded the Four Seasons Hotel chain?) donated 5 million dollars to the capital campaign. If you can't do something famous to get your name on a building, do something insanely generous. BTW, Rosalie was also installed as OCAD's first Chancellor. (The name change to add 'D for design' to the name had happened by then; in 2010 the name changed to OCAD University) . Well you'd expect change in a spot like this, wouldn't you?

http://vimeo.com/7728330
Here's a rather tedious powerpoint about
the construction of the Sharp Centre

So now I'm outed...this lover of serene and under-stated neoclassical and regency architecture,  likes the Sharp Centre. Must go have another chuckle...at their expense.