Moving in the Best Society

On the July long weekend, we spent three days in Bath and Kingston, immersing ourselves in our history. These communities along the St. Lawrence  brought to life the drama of the early days of the War of 1812, the war many Canadians see as the war that defined us as a separate - and very proud - nation.
Activities in Bath centred on the Fairfield-Gutzeit house (1796), built by the sons of William Fairfield who built the outstanding Fairfield House at Amherstview.

The lads, Wm. Junior and Benjamin, moved to Bath in 1793, seeking their fortune - and managed to do so. They became influential members of the community and entered political life. It was their ship, 'The Two Brothers', which was burned by raiding Americans in the early days of the war along the St. Lawrence. 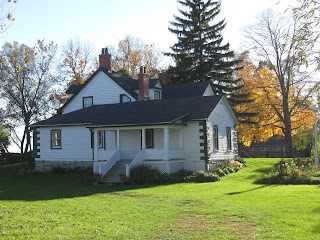 The house is much changed from the original one and a half storey Georgian form with steep roof, which betrayed its Vermont origins.


The non-profit Fairfield-Gutzeit volunteer organization manages and maintains this incredibly important property, as well as two other Bath heritage buildings I have written about - the Bath Town Hall and the Layer Cake Hall.


So, what's a girl to do?
I joined the Fairfield-Gutzeit Society, and felt pretty darned good about it.
Just wish I were a bit closer, so I could put my energy where my admiration is.
Posted by Ancestral Roofs at 8:53 PM