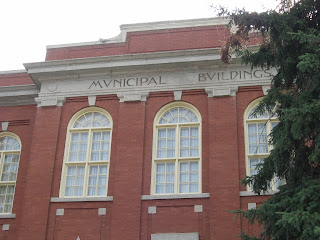 As I've mentioned in other posts, I am getting serious about my study of Classical architecture...in all its forms, interpretations and revivals over the centuries. More on this later (with a caution to skip if you have a tendency to boredom while listening to others' struggles). 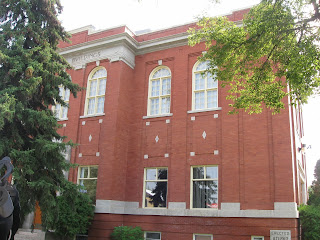 One of the spots we had a wander 'round on our holiday last summer was Melville, Saskatchewan. The town was a gas stop on the way between two planned destinations - but itself was an unexpected surprise. I took some photos of a rather grand-for-a-small-Saskatchewan-town civic structure, encouraged by the helpful plaque, and made the acquaintance of the 1912/13 Melville Municipal Building. It was built as the Town Hall/Opera House, and is considered "one of the province's most attractive city structures of the era." It's a heritage building because of course, old in the west is anything before 1914, given their later settlement and growth. 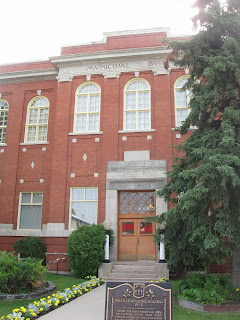 The town (which appeared to be 'getting it' regarding its built heritage, with several other fine old buildings in use, and an ambitious railway station restoration underway) was justifiably proud of their birthday girl. They had devoted considerable effort to resurface the dome, restore the windows, doors, brick and masonry, and were planning an elevator to provide accessibility to the second floor, for better use of the facility. 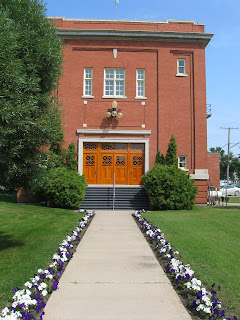 And why did I choose to start my classical journey in Melville Saskcatchewan? Because last night as I studied the black and white photos in one of my reference books (A Guide to Canadian Architectural Styles, Maitland, Hucker and Ricketts) there it was. Page 138. "Modern Classicism at its most reduced and economical form", although the caption also reassured that "it is a moot point whether the stylistic influence  is Modern Classicism or the Georgian Revival style."

Good grief. It's like identifying birds when the trees are full of immature specimens and transients. With the same reminder. Don't try to name them. Enjoy. Watch. Appreciate their beauty.


Posted by Ancestral Roofs at 4:12 PM