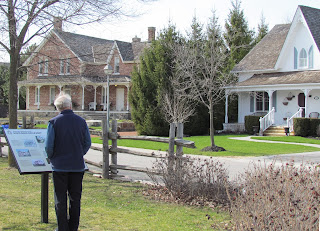 At right is a photo of my dear Den musing about what a pleasant change this vista is from the
miles upon countless miles of newly built subdivisions of no particular pedigree that we have just winced our way past on our trip from Kleinburg to Markham.

Oh, and let's pause for a moment to think about the good Ontario farmland that's just been paved over ("if you ate today...)

What LOML is looking at is a small corner of Markham's 42-lot heritage subdivision Markham Heritage Estates. Despite being an 'artificial' construct, it has such an aura of authenticity with its houses of beautiful design, fine workmanship - and history.

This place has soul in the midst of soul-less urban sprawl. That's due in large part to the ages of the buildings - from 1820's to 1870's. Something like that cannot be replicated, only preserved. 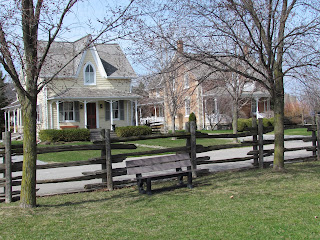 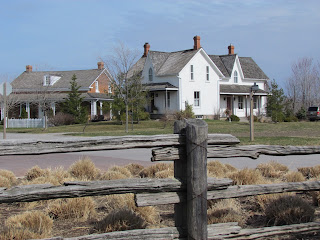 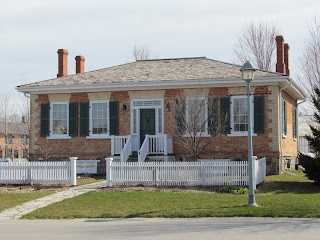 From the interpretive plaques in the centre of the circle, we gleaned house histories for some of these.

The fine James Thomas House (1856) at top, with its "Gothicized Palladian window" in the front gable, once sat at 9792 Highway 48 south of Major Mackenzie. You can see why it wanted it out of there. James Thomas, an inn-keeper in Box Grove and later a successful farmer in Mount Joy (both likely absorbed by the city now.) 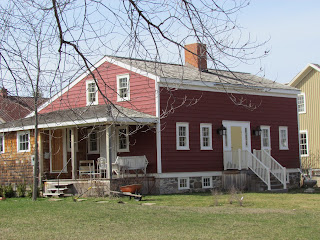 The Georgian brick Ambrose Noble house has two entrances; one was likely the office of this tannery owner, according to the Markham Town Crier site.


The c1845 Richard Lewis house below, with its patterned brickwork, 6x6 windows and eaves returns is a typical Georgian tradition farmhouse of the area: this one was rescued from urban sprawl near Gormley.

So, I urge you to go visit. Take in the Markham Museum, while you're there - a great outdoor collection of even more local buildings. Just don't venture out on 16th street toward Kleinburg. No miracles there.

Posted by Ancestral Roofs at 3:47 PM