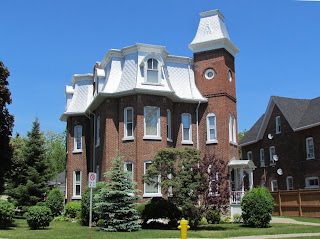 One day last week I  learned something from Facebook.
Actually, I do that most every day, as my friends are intelligent people who post interesting stuff, and the pages I follow tend toward heritage and architectural history.

On January 4 Connie who is Facebook host for Trenton Town Hall 1861 (the page of the Trent Port Historical Society) posted an account of businessman and steamer agent William Jeffs. This was his home, at 116 King Street, built c1884. The site features a photo taken around 1900 when vines climbed the tower, and a cascade of young ladies graced the steps. 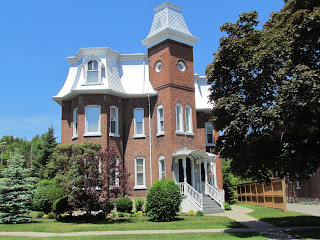 Although William Jeff's house sits a respectable distance above Dundas Street nestled near the base of Mount Pelion, his life was on the waterfront. He owned a grain elevator right at the harbour, and another brick commercial building.The image on the site (from a Belden's atlas, maybe?) shows 1870s sailing ships at the wharf and several wagons and teams representing the grain shipment which took place here.

For some reason I don't have photos of the area around Queen, McGill and Shuter streets, but it's calling me back. The neighbourhood boasts several wonderfully eclectic and boastful red brick mansions; sadly they are now living in genteel poverty, subdivided and neglected. One on Queen Street just before the intersection with Shuter, is Victorian eclecticism writ large, with an Italianate tower with  Mansard roof (similar to the Jeffs house) tall narrow paired windows, and an ample frosting of gable end trim. Although the main house sports a gable roof, a back wing goes Mansard.  Dormers. Cresting. Finials. Polychromatic slate. Check, Verticality the watchword. 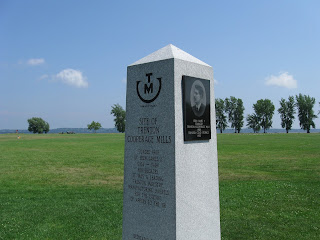 What I find absolutely fascinating is the view these houses must have had from the back of the properties - over a bluff and out to the Bay of Quinte, past the railway lines of the Canadian Northern  and an industrial district which contained (among others?) the  Trenton Cooperage mill, founded in 1908 to manufacture barrels for the export of apples from wharves along this same shore. Now it's the home of Quinte West's wonderful library (winner of the 'best view from a library' award), the green expanse of Bayshore Park's soccer fields beyond the memorial, and a new marina ("slip into something more comfortable.")   Time travel. Tickets here.
Posted by Ancestral Roofs at 3:32 PM