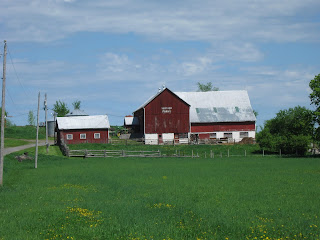 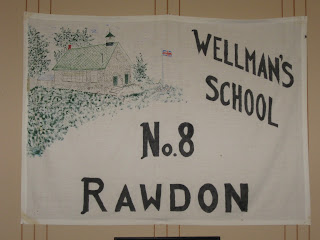 Her mother recalls buying her train ticket to Wellman's Corners; the station agent observed that he didn't know anyone who'd ever gone there. It was a flag station, meaning just that. If you wanted to travel, you flagged down the train. I remember visiting Halloway a few years ago (interestingly, also on a HCHS bus tour) and hearing John Emerson talk about his mother having to flag down the train there, to get to 'Normal School' in Toronto.

It was a simpler time.  Millie Morton's book describes "a century of change in Ontario"; the most poignant for me (having lived the experience) is the change in small rural communities as we young people turned our faces to the city.

In the book, her mother recounts being greeted by a trustee (and her future father-in-law) Mr. Morton. He proudly introduced Wellman's Corners as "the hub of Rawdon township." He showed her the neighbourhood with pride - fine brick houses, electricity newly installed. Cheese factory supplied by local dairy herds, general store, church, blacksmith, Orange Hall, new school.

One of the most significant blows to rural communities was the loss of the one-room school. Once upon a time the school and the church  were the centre of community life. As we became more mobile, and succumbed to the attractions of larger towns and cities, the support for these local institutions dropped away, and they closed. And suddenly, our communities had 'heart trouble', and they died.

The consolidation of one-room schools into larger rural schools in  the 1960s was hugely significant; ironically they too are now redundant in many cases. Some still stand empty. A few have been repurposed, including one particularly appealing story in Milford, Ontario. 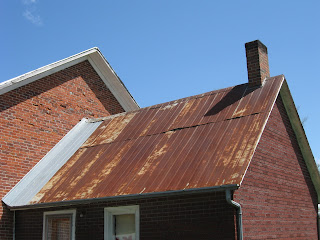 The closure of country churches was another huge blow to these communities. I can still remember Sundays at Bongard's United Church, although it was long ago deconsecrated and demolished.

The loss of a post office (I think of Rednersville) and the closure of the small industries which supported local farming communities ended their proud self-sufficiency. 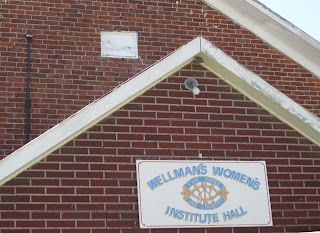 On a HCHS bus tour a couple of years ago, we were hosted by a group of Wellman's Corners Women's Institute members, who shared the story of their proud community; they still have that community pride. The former church has become the headquarters of the Wellman's Women's Institute Hall. I salute them for keeping their community history alive.

Women's Institutes have been a force for good in small communities since 1897. I saluted the formation of this international  movement in a post last March.
Posted by Ancestral Roofs at 10:36 AM