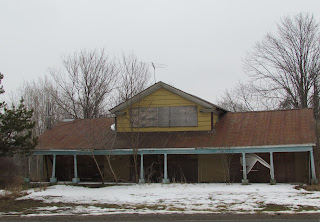 On my way back from the countryside west of Brighton last week, and an interview in an exquisite hill-top aerie overlooking Presqu'ile Bay, I chose the less travelled route, as always, and found myself in the fog, on Smith Road west of Smithfield. See for yourself.

An upcoming issue of County and Quinte Living magazine will explain why I was in the area. But for now, it's about this house. 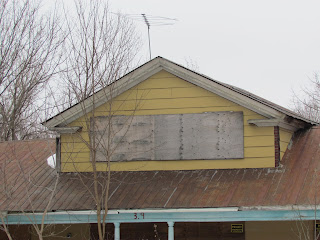 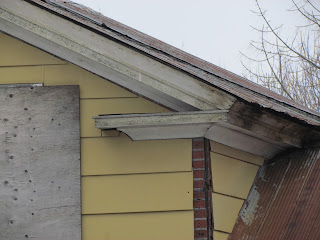 As I motored by, the pronounced cornice and eaves returns of this unfortunate house caught my eye. I returned and took refuge in someone's driveway, while I had a closer look.

At the risk of repeating myself (because surely I would have posted about this at some time, but even my blogger search tool won't confirm it) I am fascinated by houses in the temple front form. 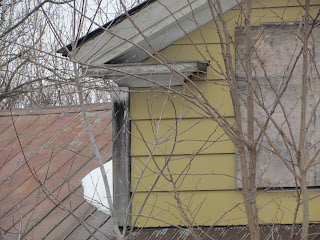 The finely moulded eaves returns echo the pediment of a Greek temple. Note a vestigial corner board in the photo to the left.

Sadly, the years have not been kind - whatever may exist of window and door trims have been muffled by plywood sheets.

The Smithfield house retains wings to each side, like Barnum House. And like it, this grungy gold house presents its gable end boldly to the road.Symmetrical wings of lower height flank the facade; in this case the low roof  of the wings extends forward to create a front verandah, held up by wobbly kneed posts. 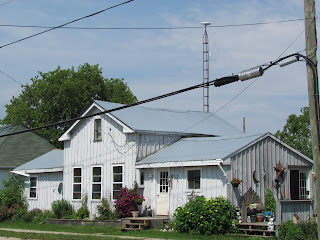 Despite its decrepit condition, the Smithfield house recalls the wonderful temple houses in Demorestville. These houses haven't been neglected, but that's not to say they've survived. They didn't have the sophistication of detail of larger houses, even to start.


Modernized and reclad, they've lost all trace of their fine Classical detailing from the period of affluence that made that village the biggest concern west of Kingston (surpassing even York) at the beginning of the c19. The village still has some Classical revival architecture (I'd recommend Northport also. Here's a peek.) 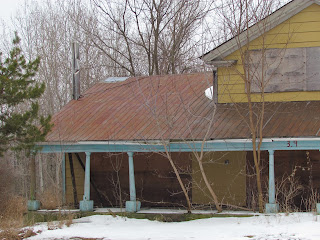 For a glimpse at a 1930 Eric Arthur photo which captures the delicate beauty of the houses, have a look at The Settler's Dream, page 309.


You can see both of Demorestville's tiny temple houses as they are today, from this Streetview vantage point.


I wish this house well; but I fear for the worst. Lots of estate home building going on in the unspoiled neighbourhood.


I think its prospects are about as gloomy as the day we met.

But, hey. That's no way to say goodbye. Let's not part on a sad note. Have a look at these examples; that graceful temple front form (with or without columns or pilasters, two stories or one/one half,) the constant.

That should do 'til we get there in person, right?


Posted by Ancestral Roofs at 7:03 PM