I've loved this austere home for so long. I first saw its black and white image in Marion Macrae's Ancestral Roofs. The misty day on which I visited did its best to sustain the b&w effect. The austerity of the structure calls to mind a Cornish farmhouse.

This is the 1820s colonial Georgian home of Hamnet Kirkes Pinhey, English merchant who profited from his adventures in the Napoleonic wars, taking up a grant of 1000 acres of riverfront property in the newly opening Ottawa River area.


His plan, well achieved, given the challenges of the era and the area, was to create an English community in the wilderness, with himself as lord of the manor, an industrious village around his feet. He called the place Horaceville, after his eldest son.

Pinhey's daughter did a watercolour of the estate in about 1837. Suppose it's public domain by now, so I'm sharing my imperfect photo of it here. Notice the church for which he donated land and funds. Very English gentry of him. He was a social and political leader, to be sure. The siting of his estate symbolized his social status. 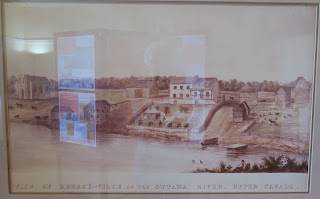 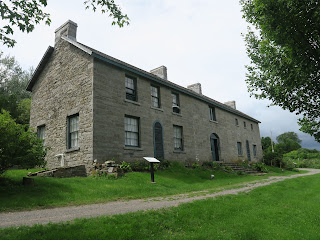 I stood on the steps of the central bay of the conjoined houses, looking out on the Ottawa River, as Pinhey might have done, imagining myself lord of all I surveyed, and marvelling over what he managed to create in what would have been a wild wilderness indeed. Below him along the Ottawa River would appear occasionally the temporary shelters of the area's first peoples, and then the shanties of loggers (the trade in squared timber, made viable by Napoleon's blockade, was underway by 1806,  Philemon Wright proving the timbers could be floated down-river and rafted for travelling onward to Montreal.)

The manor house is part of  the almost 200 year old estate. It's heart-breakingly picturesque with its wooded areas, grassy hillsides, stone and log ruins, a terraced home garden, and the point itself (currently closed for rehabilitation, so popular it is) on the edge of the Ottawa River. Throughout the property (a good workout due to the terrain) are interpretive panels with just the right amount of history and architecture. 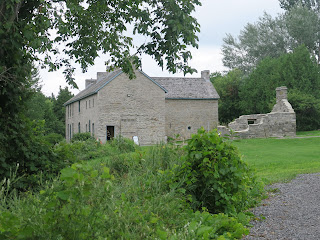 Perhaps I should just leave you to wander and make your own connections. I'll leave a few hints in the photo captions.

To the right of this photo is the ruin of a good stone kitchen which once joined to the log section of the house.

I read that three exterior walls of the house were stuccoed smooth and scored in imitation of ashlar stone, a common enough strategy for uncommon early stone houses with pretentions. 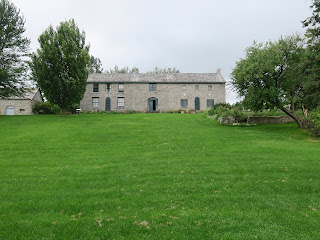 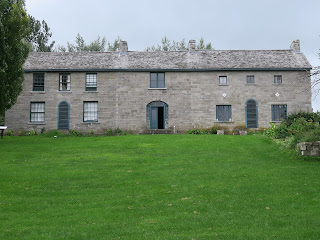 Clearly, the manor house was built in sections. The right side in these photos was the 1822/25 ballroom addition to an even earlier log/clapboard section. The c1837 watercolour shows the log section, I believe, and the first  stone section.

The centre section, with the elliptical transom above a wide doorcase, was added in 1841/2. 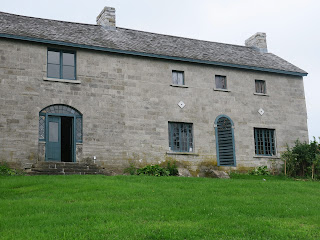 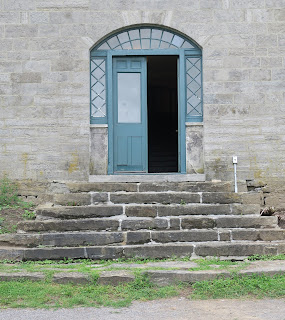 This doorway opens into the entrance hall. Rooms opened to right and left, the library leading further in to the drawing room. Just how far inside the door one got depended on one's social standing.

In another post, I'll show some photos of the interior, and tell more stories. What isn't obvious is the graceful processional stairway leading to a dining room on a half-level at the back. The whole place felt spartan and cold, echo-y creaking spaces with wood floors and panelled walls, bringing to mind that series with BBC's Amanda Vickery, At Home with the Georgians. 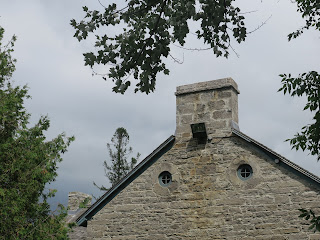 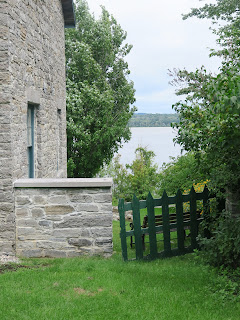 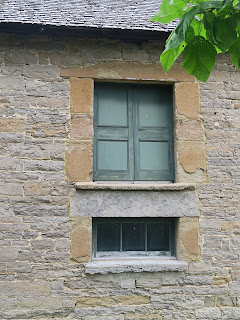 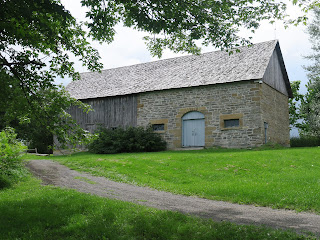 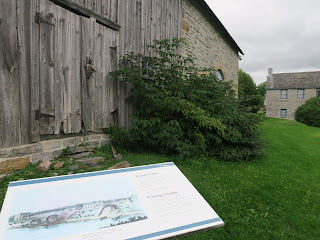 Couldn't find much information about the stable, built 1822. But the stone-work, of two colours of local stone, is gorgeous. 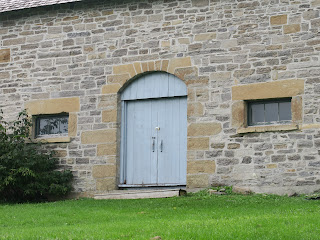 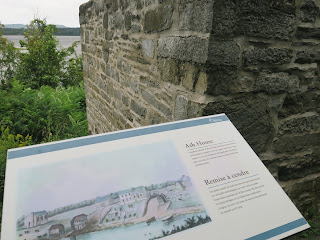 The Ash House is just one of many evocative and well-interpreted ruins scattered casually about the estate. 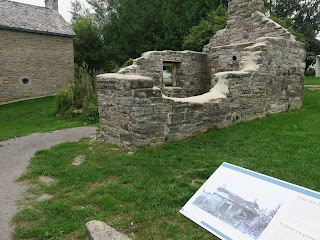 The Pinhey's Point Foundation website contains a great chronology, and a 1941 photo showing the 1820/21 log house clad in clapboard. This log wing was removed after it collapsed in the 1970s and the stone kitchen to which it had connected was stablilized for safety (and historical) reasons.

Here's another site with Horaceville history. I'd forgotten to mention the church, the grist and sawmills, lime kiln, granary and malt kiln, housing for estate workers and the seven cannons. 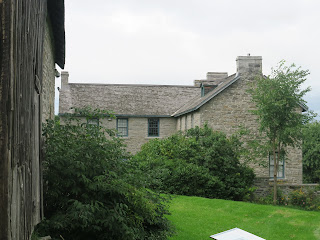 Pinhey's Point is an Ontario Heritage Trust site operated by the City of Ottawa, with 88 acres of recreational space, special history events and the well-interpreted historic house.

And here is a parting shot, a final view of the kitchen tail added in 1848, turning the house into a magnificent L-shape.

Posted by Ancestral Roofs at 3:37 PM