Your Roots are Showing

One lovely day near the end of September I did something I had never done - walked from one end to the other, along every street and lane, of a village that one branch of the family or another has inhabited since 1786. Looking to make some photos for my Signposts column on Milford, I revisited well-known spots, with a new eye. And re-staked my claim to this place.


As it turned out, the photos were surplus to requirements, so I made them my own (since they were.) And unconstrained by any prohibition on first-person indulgences, I make Milford my own again. (If you want the fit-to-print story, the column appears here.) 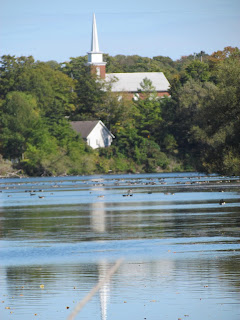 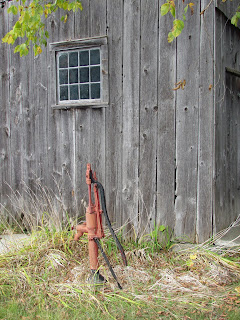 I remember mom (nee Striker, of Royal Street) waxing nostalgic about the old Clapp-Scott mill on the western shore of the millpond - I think there was a Scott uncle and aunt living nearby, whom she visited as a girl.

According to Murray Clapp's fine mill history The Mills of Milford, Ontario, 1800 - 1972, this mill is but a remnant of the 1812 mill complex developed by UEL entrepreneur Joseph Clapp on the upper falls of Black River (and a relation, as they say, by marriage, from the time the Striker diaspora began in 1786. The book The Stryker Family in America explains that ancestor Sampson narrowly avoided execution as a British sympathizer, forfeited his lands, and left for Sorel Quebec with his wife Ursula and her brother Joseph Clapp.) Mom had happy childhood memories of the old mill (sure would love to have her nearby to take a question or two right now); our family usually visited the upper falls during spring runoff ; our dad as drawn to the sound of running water as any beaver. 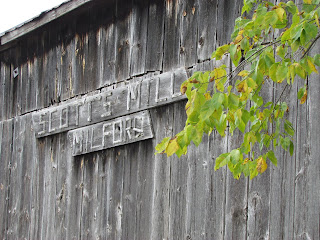 My article about the mill (part of a series) appeared in  County and Quinte Living (Summer 2013, p.61.) It was informed by Murray Clapp's fine book, and an interview with a passionate local volunteer, who was instrumental in saving the old mill, and much of the original milling equipment inside.

I grew up knowing that our family was connected in some way to the milling history of Milford. Through my maternal grandmother, born Helen Dodge, in Milford, I was connected to the one-time proprietor of the mill on the Black River, in the village. I remember our Sunday visit to grandma's house on Royal Street, the day after the abandoned frame structure burned in October 1956. I remember being fascinated by the smoking rubble, and the adults' shocked reaction.

Once again I wish mom were here to connect the dots, now that I want to know the family stuff. As kids, we were surrounded with a wide interconnected family, one's 'people', among whom one belonged and felt comfortable. I realize now that most of the familiar surnames that formed part of adult conversations, the faces at gatherings like card parties and church events, were those of folks related by blood or marriage to one or other of our parents, in that way that old families, in one county since the late c18, branched out through marriage. I remember occasionally having dinner with a family who was not 'related', and how awkward it felt.
I wonder if this is part of the tension that sometimes appears between new people drawn to small communities for rural charm, and those who go 'way back', with deep history, feeling somehow marginalized by new people for whom those connections don't matter.

In recent memory there have been people creating new ventures in the old stores that were 'the big city' when mom and her siblings might have stood at the counter wistfully surveying the penny candy. These would have been stores patronized because of family connections or long association. All closed now, a new convenience store/bakery opened in VanCott's garage.

I remember hearing the adults speak of Dexter and Manly McKibbon. I expect one or other of the local stores (Manly had a dry goods store, but it burned at some point) would have earned the grandparent's trade - although farm families likely bought little in the day. 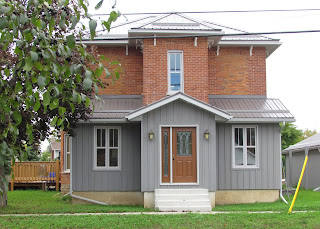 Dexter built a fine brick house (one of three brick houses I recall in the village, another being the Methodist Manse) in 1876, with the familiar projecting centre bay, bracketed roof, with verandahs at each side, and lots of lovely gingerbread. All gone now, replaced by an unlovely entry with vinyl windows and door. An extension at the back suggests a future as tourist accommodation. 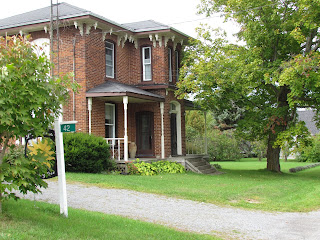 A well-maintained 'twin' on a (the) back street was once owned by Fred and Julia Dodge, according to the Milford walking tour guide.

Grandma Striker was the daughter of Fenton and Augusta Dodge. I  have a tiny old photo of him driving a wagon load of milk cans. I wonder what the family connection is? I have a genealogist 'relation' - scion of the other UE Clapp brother - who would know. I once considered getting more involved in genealogy; it was she who warned me to fill the freezer with frozen ready meals before I began. I stepped back from the edge, shortly after this 2012 post. 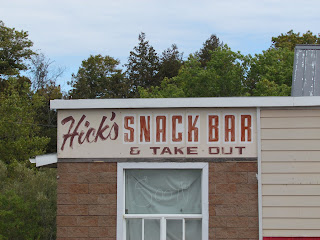 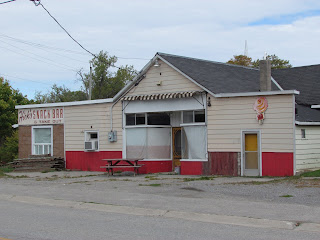 This forlorn abandoned store has history. It was home to a succession of mill owners (the river and the mill were conveniently right behind the house): Clapp, Dodge, Ellis and Hicks. Most recently, it was the ice-cream stop on Sunday drives, operated by the third generation of Hickses. We stopped once with mom and dad, back in the '80s. Dad was aghast at the cost of the newfangled Haagen Dazs ice-cream bars. 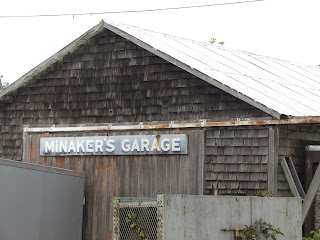 Minaker's Garage will never die. It started as Horace Dulmage's machine shop, and was purchased by Bruce Minaker in 1925. It has done well ever since the Depression years, as a treasure trove of used auto parts. And a photographer's delight. 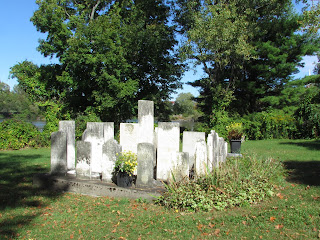 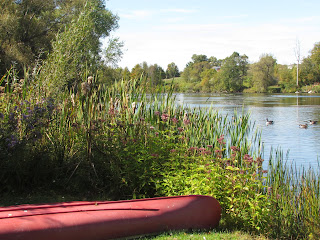 The old Clapp Cemetery was my resting place during the walk. A more practised eye was required to figure all the names and connections, but I touched my ancestor's stone, and breathed in the peace at the millpond shore.

A chin-wag with an old-timer (likely not much older than me) who remembered my 'people' along Royal Street, and bemoaned the Toronto ingress along his street, led to some reflecting on change. 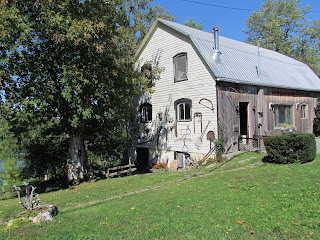 This appealing hip-roofed structure along the pond shore is home to an artist, but was once an antique shop. It was on a visit with mom that I succumbed to Depression glass collecting (which didn't continue, as I didn't have the prices required - irony there?)

In recent years, history minded folks created a mural map on the east facade, well worth a stop. It recreates a 1912 photo of the village, when places like Dodge family bakery and the McNamara hotel and post office still stood. 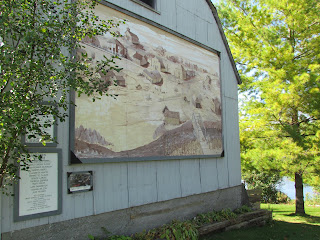 Mount Tabor Wesleyan Methodist church was dedicated in 1867, becoming a United Church in 1925, closing its divine doors in 1967. It reopened as a community theatre and event venue in 1984, and is still operating. It's the regal presence at the heart of the Milford fall fair. I don't recall ever attending services there (grandma's family were part of the South Bay flock) but recall (with horror, now) attending a 'donkey baseball game' once, at which no-one stood up for the dazed and confused donkeys.

Despite the hazy heat and occasional barking dogs, I trudged down to the bottom of the dip where the road runs along the water's edge.Impossible to believe that small ships were once built here and dragged downstream to Black Creek. When I was little, the road southward curved around the edge of the limestone escarpment, emerging close to the top. Today it's the quiet oxbow of Chapman's Crescent, where not even Streetview dared to go.

Blame it on the winter bug I've succumbed to, this is more a blather than I intended. But I wanted to uncover some Milford layers, and perhaps I've taken you along with me. If you want more background, I revisited Grandma Striker's family house history in another story (same magazine, the following summer, page 48.)

Striker, Dodge, Clapp, Scott, Ackerman, Minaker, Welbanks, Hicks, Anderson, Ames, Hughes, Walker - genealogists know how all these connect. For me, it's enough to say the names. (Thanks, Al Purdy.)
Posted by Ancestral Roofs at 1:08 PM