I have never been to Rome - we passed the turnoff once on our way down the spine of Italy, savouring medieval villages on our way to the seaside at Positano. It just felt too big, the driving too nuts,  and the time too short, to appreciate adequately the Roman, Renaissance and Baroqueness of the place. We have promised ourselves a return of three weeks to a month. One day. Perhaps guided, to a degree.

We have encountered Rome's greatness, and felt the remarkable expansion of its empire, in travels here and there over the years. Today, something made me want to cast about to collect some of the images we have taken away over time.

Rome is enduring. Certainly history of art and architecture courses over the decades have taken me there, and dragged me through a mind-boggling agglomeration of antiquities and more.

Last night, a documentary on Acorn hosted by Mary Beard (Dame Winnifred Mary Beard - titles omitted in the interest of conciseness- Professor of Classics at Cambridge) kept us there for a bit, and will draw us back.

Today, I found this. So I'm now registered for this free (with ample option to transfer to credit status, for a fee, of course) online course offered by Yale,  an Introduction to Roman Architecture - with all the external motivation provided by assignments, reading response deadlines, and the like. Playing school. But a way to get myself out of the mid-winter study slump.

We visited Pompeii in 1995. The summer's most brutal hot day saw exhausting bumper to bumper traffic chugging down to the beaches on the Amalfi coast, while we enjoyed open road heading to Pompeii. 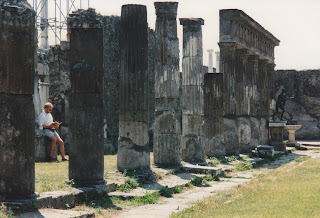 Sure, it was hot. But there were water vendors, and cool spots inside stone buildings. And Pompeii, pretty much to ourselves. 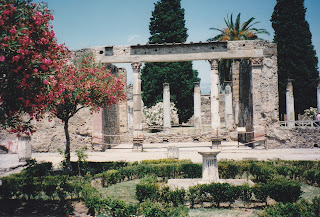 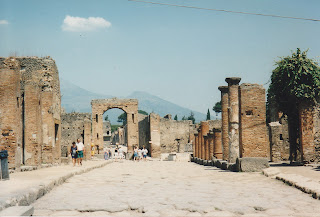 Unless you happened to be among the conquered.


And that's what, in year 43 of the common era, the native Britons became. England's green and pleasant land is still traversed by 'Roman roads', modern thoroughfares along shockingly straight roads built during the Roman occupation, and littered with a startling number of Roman stone ruins, and other traces of their advanced society imposed on the wild Celts.


We spent seven weeks in England and Ireland last spring. A treat was a return to Bath, with a few days under 'our own' roof. I posted in December about an iconic Bath destination. However, the Roman baths likely win out in the iconic category. Granted there are layers of history built atop the Roman baths, but they are there, and a wander through the darkened caverns reminds us how sophisticated these builders were, and how well they lived.
The Romans also built military roads throughout Britain - straight being their trademark. Here's a Streetview peek at the Fosseway, a Roman road running through a niece's village, on the way from Exeter to Lincoln. 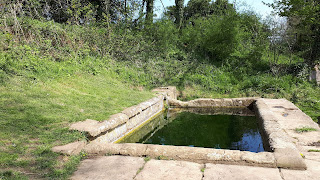 And this is purported (by folks in the Gloucester village where we stayed with family) to be a Roman well. Might be newer, Medieval maybe. A newbie.


But there's no need for speculation along Hadrian's wall, built from one side of the country to the other, separating Roman Britain and the wild Scots (they just couldn't deal) over 14 years beginning in 122 CE. After 2000 years, sections of the wall (which weren't repurposed as churches, homes and barns) still stand, along with remains of mile castles and turrets.

At the urging of Lincoln friends, we visited Vindolanda, a Roman fort and settlement, and home to ambitious scholarship and a world-class museum. This truly is an amazing place. As evocative as the empty stones of the wall sections are, the excavations, preservation and interpretation of years of Roman occupation at the site are astonishing. 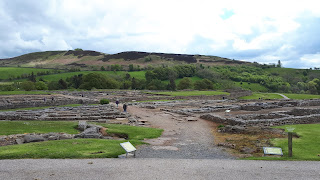 This link will help...I'm a bit speechless remembering it all. 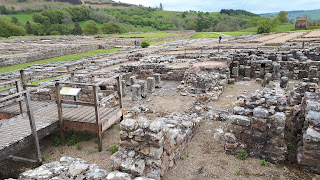 As a result of all this Roman research, I signed up for that Yale course. It's a MOOC, Massive Open Online Course, and that means I won't be sitting down any time soon with my tutorial leader. I'll keep you posted (unless I start to skip class, and will be embarrassed to admit it.)

And secondly, I gave thought to how this relates to my self-imposed Ontario architecture mandate. And here it is:

British home-builders of the mid 18th to mid 19th century (and Canadians of the 1820s to 50s) began to apply plans, elevations and decorative details found in ancient Greek and Roman buildings to domestic and public buildings.


Niagara on the Lake is a great spot to spot Neoclassical architecture, as it was rebuilding from the ashes after the fires of the War of 1812,  at the time the style was king. 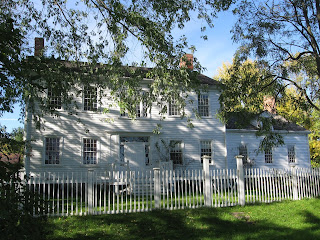 MacPherson House (by 1830) in Napanee is a delightful local (to me, anyway) example of how graceful Neoclassical influences lightened up the stolid Georgian form.

This is such a great place, do visit. 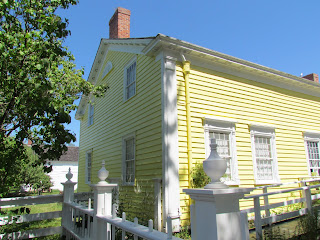 This is the lovely lovely French-Robertson House at Upper Canada Village (formerly at Milles-Roches.) Its pale yellow clapboard shows off the delicate neo-Classical details. 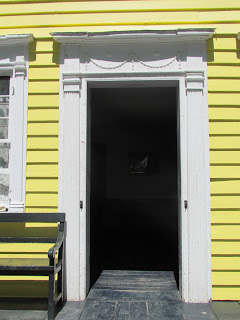 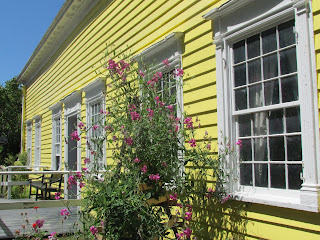 Enough Neoclassical Ontario for one day. If you want more, here's the seminal text in PDF format. Print away. Author Leslie Maitland cites the legacy of the style as "a taste for historical accuracy and a love of lucid design."

Okay, my work-out here is done. Best go start work on that Roman Archi course. As Seneca said: "Every new beginning comes from some other beginning's end."

Posted by Ancestral Roofs at 2:57 PM