Not too long ago, we actually went somewhere. The recent dearth of AR posts attests to a long pandemic self-isolation, when even a solo drive in the country felt like civil disobedience. 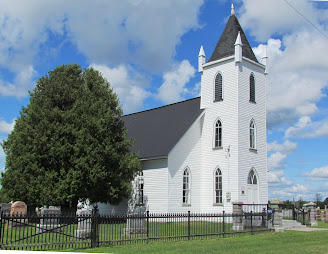 We spent a delightful week at a secluded cottage on the Rideau River and although we passed three of the days immobile like cats in the sun watching the river run, we did go on a couple of visits to favourite sites on the UNESCO World Heritage Site Rideau locks system, and to others we hadn't met yet. A quick shufty online mentioned a church of historical interest, Wolford Chapel. And wasn't Wolford Chapel just down the road, a nearby dot on the map? We began scouting around for an historic stone church, further dignified by a bright blue Ontario Heritage plaque.
Wolford Chapel is associated with Sir John Graves Simcoe, the first Lieutenant-Governor of Upper Canada, 1791 - 1796, back when we needed imported vice-regal authority to manage our fledgling country on behalf of the British Crown. 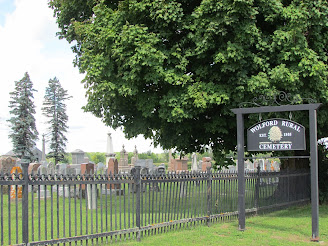 We found this tidy Carpenter Gothic at the corner, and did a quick recce. No plaque. No suggestion that there might have been an earlier stone church clad in wood siding, after an ill-advised improving decision at some point. No confidence that the great Simcoe would have been buried in this bucolic farming country.
Ah - no similarity at all, actually. A quick return online, and the truth emerged. The photo at this link explains everything. Ah, well, it does raise a few additional questions, but we'll come to that. Wolford Chapel is on what remains of the Simcoe estate in Honiton, Devon, England. The chapel was built of local limestone and roofed with slate, in 1802, at Simcoe's behest. Sadly, Simcoe died (and was buried here) upon his return to England after his Upper Canada service, before heading off for similar responsibilities in India.
The church remained with the estate during its eventual subdivision and selling-off. The most recent owner, Sir Geoffrey Harmsworth, likely not wanting to be lumbered with its maintenance, had a brainwave. In 1966, 160 years after Simcoe's death, Harmsworth donated the chapel to Canada - the Sir John Graves Simcoe Memorial Foundation, actually. So Premier John Robarts received the deed on behalf of the people of Ontario, and in 1982 the Ontario Heritage Trust acquired the property. Dedicated English volunteers maintain the chapel on behalf of the province. Don't anyone tell Doug Ford.
Research for this post has rekindled my interest in Elizabeth Posthuma Simcoe, who not surprisingly is also buried at the chapel in Devon, along with many of her many children. She enjoyed her stay in Upper Canada with hubby. Admittedly, it was likely not a life of many hardships, as was life for many of her contemporaries, newly arrived in the bush. But she distinguished herself with an enthusiasm for life - as a diarist, artist, traveller and centre of a brilliant social life. Her delicate watercolours and sketches, with that soft English complexion, create a fascinating look at early Toronto (it was Sir John, after all, who selected the location for York and the fledgling government.) One of Elizabeth's watercolours depicts her home, Castle Frank.
Have you ever wondered about the Castle at Castle Frank Road, Toronto? Or are you like me, who on the rare occasions I've been driving east on Bloor, positioning myself for the needle's eye that marks the descent to the Don Valley Parkway, preoccupied with "I'm going to die" thoughts? Perhaps, if you've ever stood around waiting for the train at the Castle Frank subway station (no castle that) you might have pondered the name.
Turns out, there is a plaque on the surprisingly leafy grounds of Rosedale Heights School of the Arts (risen phoenix-like from the former Castle Frank High School) at 711 Bloor St. East.  The OHT plaque commemorates Elizabeth Posthuma (so named by lugubrious relatives to honour the recent death of both parents) Simcoe, diarist and artist, who so enjoyed the freedoms of Upper Canada. And the plaque marks the approximate location of the couple's home in the wilderness, poised at the top of the bluff overlooking the Don River.
Posted by Ancestral Roofs at 10:30 AM