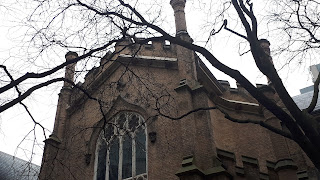 As anticipated, my first visit to Toronto since the death of my dearest travelling companion, and two years in hiding during the tempest of Covid, was an emotional journey. But a great one, doing what I love most in this great city - walking. (Well there was that afternoon at the AGO, and La Traviata at the light-filled Four Seasons Centre.) From my delightful bolthole at the friendly and efficient Hilton DoubleTree, 'my' Toronto was at my feet. The opera? A short ten minute walk off-street - and that's counting reading ubiqitous plaques.

The texture of Toronto - walls of towers oppressive yet appealing, their variety of design and material creating a rich tapestry which never fails to delight me. And occasionally, leaved between all that glass and masonry, there will be something on a smaller scale, of earthier materials, quieter somehow, emitting a different energy, surely an invitation to time travel. Something from 1850, say, or thereabouts. Seeing the city before its many trees burst into leaf, bleak on this grey day, focussed attention on these little islands in all the city haste, and wonderfully, revealed secret places usually hidden in treetops. 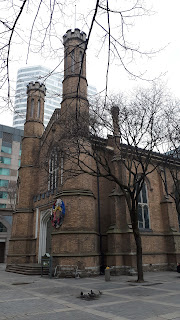 This day, this walk, enabled me a new view of a favourite place. I found it in another life, fleeing the overload of yet another download of new stuff from the Ministry in the overwrought Mowat Block on Bay Street, then escaping the intensity of a fast-walk along Bay Street. Trinity Square.
Since then, I have been drawn many times to this square. It's a portal to another age, evoking the power of the ancient labyrinth. It makes an homage to past building and natural history - Taddle, one of Toronto's buried creeks, arches recalling an early Eaton's structure. I found a 1908 photo of men hand-digging the foundation for the Eaton's warehouse, hard by the side of the church.
Many photos exist of a later incursion, when the entire church complex of three early buildings was saved from extinction during the ambitious 1977 insertion of the Eaton's Centre, built around and not over the square, thanks to  passionate opposition by heritage groups.

Despite all this city, and history, peace of a sort reigns here. This 1847 church, built on what was once farm fields and swampland has been a radical church from the beginning. The church appears to have been  endowed by an Englishwoman who was shocked at the inequity of  pew rentals - costs which prohibited those without means, access to church services. Ironically, the church continues its ministry to the inner city poor, cheek by jowl with that icon of posh shopping, the Eaton Centre. I  keep getting the image of the poor huddled outside the castle, the moneychangers in the temple.

Holy Trinity's social justice mission is expressed more eloquently than I can do on their home page. 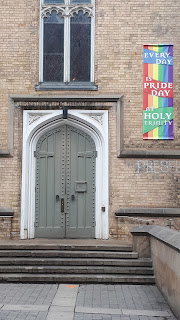 Here are two comprehensive accounts of  the rich history of Holy Trinity - the incomparable Taylor on History, and that of  Blog TO, which has taken over the archive of  Doug Taylor's lifetime of work, and publishes his accounts from time to time.

Posted by Ancestral Roofs at 1:04 PM