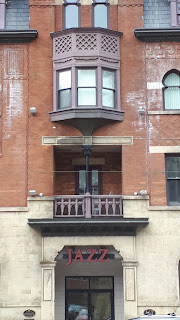 Now THAT was fun. I discovered a fine forgotten building in Toronto not long ago, and crossed Church Street to read the magnetic (to me) blue and gold plaque. This unusual building (more on that later) bore the sign JAZZ. A jazz club, I assumed.

'Athenaeum' rang a bell; weren't they akin to the Mechanics' Institutes (here's a Toronto example).which offered reading rooms and technical and adult education for those men seeking social and economic betterment? Many evolved into public libraries. Institutes, not the men. And I use 'men' for reasons unfuriatingly obvious in that day. 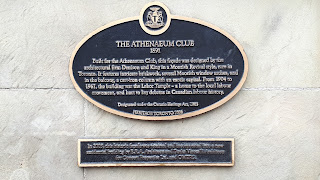 Here's where the fun starts. The first item in my search for Athenaeums (ae?) turned out to be one of my own. In the February 2016 issue of the newsletter of the Hastings County Historical Society (doubtless you still have the issue) I warbled on about the Atheneum in Belleville, Ontario. Modelled optimistically on the Athenaeum Club, that exclusive arts and letters club of London, England, Belleville's offered improving fare from 1859 - 1866.  Spoiler: it failed and became a skating rink. Here's a link to the Outlook article.

But back to 167 Church Street. 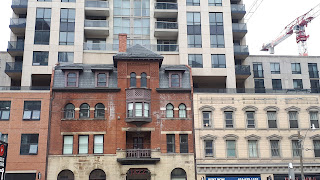 No, the anonymous concrete apartment tower isn't just invading personal space. It's embedded - or whatever terms one uses for the regrettable facade conservation compromise which allows for vertical expansion while maintaining the heritage features, if not the charm, of old building fronts. Lots has been written about this, but honestly, with square footage at a premium and a city multiplying itself daily, what choice?
Without greenery, without historic context, there is too much lost. But without that preserved front, and a plaque, types like me would never know about this ornate historic appendage welded onto the strictly functional Jazz apartments.
The building was built in 1891 for the Athenaeum Club, the facade designed by Denison and King architects. The style is the rare-in-Toronto Moorish Revival, according to the plaque. Now when was the last time you enjoyed Moorish details like its intricate brickwork and Moorish windows? (The 1894 interior of Massey Hall featured Moorish arch balconies, perhaps the exotic style was associated to intellectual and cultural pursuits?) 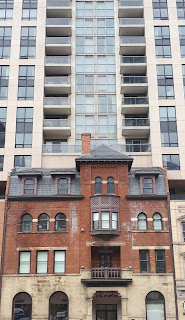 From 1904 to 1967, the building housed the Labour Temple, "a home to the local labour movement, and home to key debates in Canadian labour listory." Given that Jazz apartments is owned by Oxford Properties which is owned by OMERS, there's a nice resonance.
Other features noted in the heritage designation report: smooth-faced stonework at ground floor level, roundheaded windows, paired square basement windows. Some decorative metal grillework and window frame detail remains. The second and third floor feature finely detailed brickwork, with areas of raised diaper patterning. Some of the windows have flat stone lintels, others Moorish arches. The fourth floor dormer windows are set into the gambrel roof. The entrance is dignified by the windows above, and the recessed balcony with a single cast iron pillar with an exotic Moorish revival style capital. Projecting bay windows highlight the third floor facade, and a rooftop tower with chimney rises above it all. The facade features are all applied asymmetrically.
Sadly, the eye is distracted from all this worthy detail by a nasty case of efflorescence. Perhaps for her 131st birthday, a facade polishing?
Posted by Ancestral Roofs at 2:08 PM