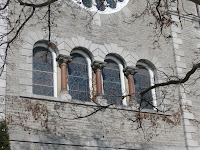 Blame it on the Romans.
Actually there are indicators that earlier cultures had the arch, but didn't make much use of it.
But the Romans, consumate builders and practical souls, made their fortunes on the strong back of this simple structure.
Stretched, it made a vault, useful for triumphal arches or roofs.
Stretched and curved, it was handy for 'halls' in huge projects like coliseums.
Rotated around an axis into a circle, it became a dome which made possible wonders like the Pantheon of 120 AD, whose 45 metre wide dome was the world's largest until the 19th century!
Swotting for my history of architecture exam, I am savouring terminology like keystone, springline, intrados, impost and (Brenda's all-time favourite) voussoirs. The arch, useful for doorways and windows, paired as Byzantine or in multiples as arcades, structural or decorative, blind or open - infinitely adaptable in the hands of the inventive and resourceful across the centuries.
According to my course notes (www.lookuparchitecture.com) there are 67 types of arches - but even Shannon might have missed one or two in her travels around the architectural world. Many of the Roman arches are still standing today - will you be able to say that of your contractor's work in 1800 years?
If I had more time, more money, and more aptitude, I think I would like to take more architecture courses. But I guess some are destined just to appreciate the work of others.
One thing I have learned - if it's not trabeated, it's arcuated :-)
top centre: Bridge Street United Church, Belleville
above left: Denis and a Roman arch, Lincoln, UK
above right: Me with a Norman arch, Lindisfarne Priory, UK
Posted by Ancestral Roofs at 9:36 AM