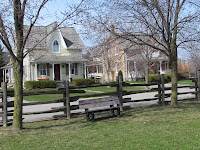 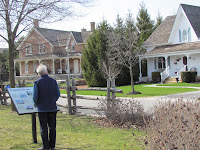 At right is a photo of my dear Den musing about what a pleasant change this vista is, from the miles upon countless miles of newly built subdivisions of no particular pedigree that we have just winced our way past on our trip from Kleinburg to Markham. Oh, and let's pause for a moment to think about the good Ontario farmland that's just been paved over ("if you ate today...)


What LOML is looking at is a small corner of Markham's 42-lot heritage subdivision. Despite being an 'artificial' construct, it has such an aura of authenticity with its houses of beautiful design, fine workmanship - and history. This place has soul in the midst of soul-less urban sprawl. That's due in large part to the ages of the buildings - from 1820's to 1870's. Something like that cannot be replicated, only preserved.

So, I urge you to go visit. Take in the Markham Museum, while you're there - a great outdoor collection of even more local buildings. Just don't venture out on 16th street toward Kleinburg. No miracles there.
Posted by Ancestral Roofs at 11:51 AM