One of the finest things about Upper Canada Village is the costumed interpreters, who portray life as it was lived in 1860. The style of dress, the activities and professions they recreate for the visitor (and our federal government's cost-cutting plan is recommending they be replaced by audio-guides like you rent in art galleries. I DON'T think so!) are endlessly fascinating.

More on all this later - I am still unpacking a multi-layered day at this astounding living history village, which will keep me thinking and writing for some time.
The brick building above is Cook's Tavern, moved from the path of the encroaching waters of the Seaway Project, and recreated here, restored to the mid c.19. A book of reminiscences of the drowned viillages, as they are called, describes the actual Cook family preparing meals for visitors, in the days before their community disappeared.

The woman in this photo is in role as a 'goodly woman' of the community, in conversation with the 'innkeeper'. She was a child when the local church was moved out of the path of the flooding. The event was  immortalized in the photo (below) that Peter John Stokes has taken for the cover of his book about the creation of Upper Canada Village. 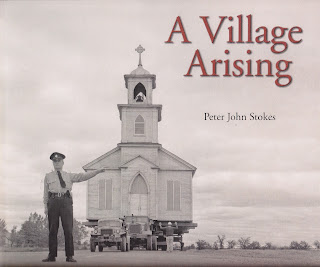 This iconic photograph shows the 1957 voyage of Moulinette's frame 1837 Episcopalian church from the path of the flooding, 20 miles along the St. Lawrence to the Upper Canada Village site. The woman told me about that day. She and her brother spent hours sitting by the roadside, waiting for the church to pass by. Their mother brought snacks and encouragement as their patience began to fade. Finally, at the end of a long afternoon, she recalled, the treats gone, replaced by boredom and discouragement, the spectacle unfolded.

The church passed by, on a pretty rudimentary float pulled by tiny trucks. A local Barney Fife, puffed up by the drama of the event, directs the entourage sharp left.

That little church was recreated at Upper Canada Village as Christ Church, beside the Lutheran Minister's house. It represents the church home of a congregation of the 1860's.

Posted by Ancestral Roofs at 10:56 PM