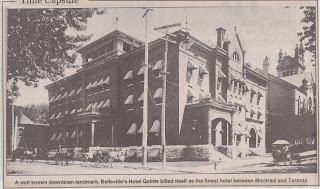 In the early days of the Hotel Quinte, the south entrance facing the Armouries was the grand main entrance. A massive portico led into the lobby where patrons were greeted by hotel's luxury appointments. The impressive marble mosaic floors displayed the hotel name, proudly emblazoned in mosaic at the entry. Stories say that both the marble, and the mosaic craftsman, were imported from Italy by Henry Corby, one of the entrepreneurs who built the hotel.


The entrance, a massive Romanesque Revival inspired portico,was removed and the entrance blocked over in the mid c.20. Until very recently (sniffle) the scar was visible, a large patch of pink modern brick on the southwest corner.

At the same time, the west entrance was changed and modernized.

During the summer of 2011, dedicated hotel staff painstakingly removed carpet that had been glued onto the mosaic floors and revealed this wonderful marble welcome mat.