So You Want to Live in the Country, Eh? is the name of a home-grown history written some years ago by local history teacher (and Quinte Secondary School colleague of Hastings historian Gerry Boyce)  Max Wooley. The book chronicles the years he and his wife spent in a red brick farmhouse north of Belleville, along a rural route near the hamlet of Halloway. (I wrote about Halloway once a few years ago.)

This is the neighbourhood, which you can reach by clicking on the Streetview link, or by driving north of Belleville on Highway 62. The bit of blue on the horizon is Ross Lake, or Ross' Pond, as Max Wooley dubs it. It's the source of Rawdon Creek, which paddles through Stirling and on to the Trent River. Their little brick farmhouse overlooked that pond. Lovely spot.

The story is pleasant - the usual city slicker getting duped by country ways. One of the most peculiar anecdotes features Wooley's delight (tongue in cheek,  I presume) at finding a swimming pool below a trap door in his living room floor. The cistern, as you might readily guess. Unfortunately, a deceased rat detracted from  his truiumphant disclosure of this indoor pool to guests at their open house.


But any book which features a house in any form will always lead me to my books - and to this blog. Do I hear a sigh? What got me thinking was Wooley's introduction to their country place - an 1876 "Cottage Gothic." Or was it Gothic Cottage? Or Gothic Farmhouse? Or Gothic Revival cottage? Or Ontario farmhouse?

It's a long way from the Ontario countryside and its  ubiquitous bargeboard trimmed centre-gable three bay house with its pointy or round-headed window dead centre to the origins of the Gothic Revival Style (1830-1900 in Ontario.) But there we begin.

Blumenson says it best, describing the style's "rekindling of interest in the building forms and styles of the various periods of English Gothic, as well as the years preceding the English Renaissance, ie. the Tudor and Elizabethan periods." (Ontario Architecture, Fitzhenry & Whiteside, 1990)

By the early decades of the 19th century, pattern books were assisting the builders of Upper Canada with technical know-how as well as style guides.These patterns included a number of Gothic details which could be added - often with reckless abandon - to plain houses. So one might see a combination of  "hood-moulds with carved label stops, numerous dormers and gables, finials, pinnacles and crockets...bay windows, verandahs...steep roof pierced by tall decorated chimney stacks." (Blumenson p.37) Gothic Revival style's penchant for the vertical recommended  board and batten cladding for frame buildings. 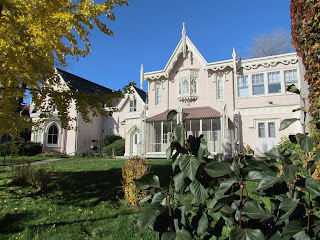 Academic versions of the style such as the superb Elizabeth Cottage in Kingston remain to delight us.

Other popular plan books of the era include A.J. Downing's The Architecture of Country Houses (New York, 1859) and J.C.Louden's Encyclopaedia of Cottage, Farm and Villa Architecture and Furnishings (London, 1867). Both available free at Google books.  A periodical, The Canada Farmer (1865) presented  helpful instructions for "a cheap farm house."
In any case, it got me thinking about the simple Ontario farmhouse form decorating the countryside.

As the style hit Upper Canada in the early to mid 1800's builders were adding one or two enduring Gothic details to otherwise symmetrical Georgian style buildings. And those were...that centre gable peak and the (usually) pointed window.

As I tune in to the academics at The Ancestral Roof (Marion Macrae and Anthony Adamson, Clarke, Irwin & Co, 1963) I am reminded that the jaunty peaked front gable decorating my own ancestral roof is a vestigial member...a nod to the pointed Gothic 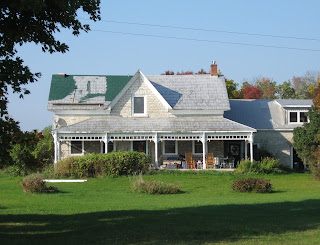 As are all of these, and many more fronting the farm properties or dotting the hills of Ontario.

So. Back to that style chat. I'm sure I have said this on occasion. Enjoying older homes is not birdwatching. Playing 'name-that-style' has never enhanced anyone's appreciation of an early home...and often proves frustrating as styles blend (or coexist awkwardly.) A bit of style knowledge is  useful to help us look for and appreciate details, understand the roots of the style, the social history of its time. I'll save the rest for the exam.

Oh, on that topic, here's a much better discussion of the Gothic Revival style, via a link to Mohawk College prof Shannon Kyle's wonderful 'Ontario Architecture' website.

I believe that appreciating our built heritage is not about 'name that style' - for it will surely make fools of us. The academic and the pattern book versions may prove easier to identify. The vernacular and the additive will regularly elude us. 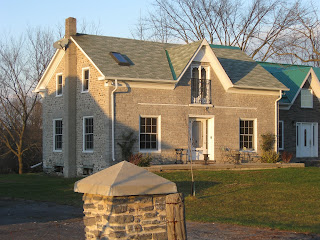 I believe it's about the idea - the architectural tradition upon which the builder drew - that's interesting (and edifying) to explore. So this is my homage to the little Ontario farmhouse, with its symmetrical three-bay front and its cheery gable. 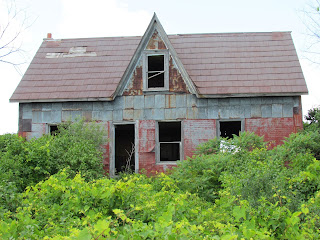 And just to settle the matter, the last word goes to Marion Macrae and Anthony Adamson, of The Ancestral Roof.

Macrae and Adamson descend from solemn discussion (I always visualize these two in a deep-carpeted library, brandies in front of a roaring fire) of academic versions of Gothic style in Ontario such as Elizabeth Cottage in Kingston, and "Picton's Gothic Cottage" (its story here) to this epilogue: 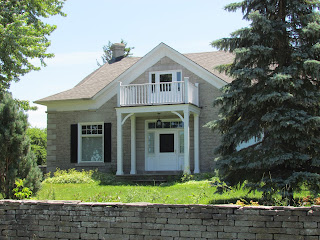 "It was the first of July 1867. Confederation was an accomplished fact. Upper Canada had been Canada West for some time, now it was to be called Ontario. The little vernacular house, still stubbornly Georgian in form and wearing its little gable with brave gaiety, became the abiding image of the province. It was to be the Ontario Classic style."

Posted by Ancestral Roofs at 4:23 PM