The 'other' White House 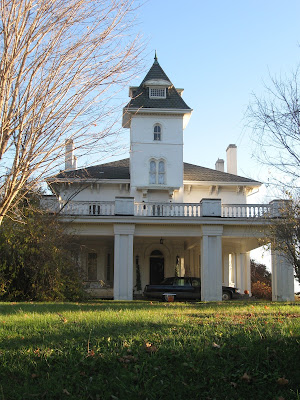 The allusion in the title is as close as you will find me to discussion about doings south of the border.
Instead, in my way, I prefer to travel back in time via my guides, the historic houses about us.

This house has special memories of my mom, a farm woman who longed for the bright lights. I recall her mentioning in passing that this was a place to go dancing, when she was younger. Wonder how often? With whom? Wish, as we all do when we've lost our elders, that I had asked more questions. About so many places.

This is 'Rene's White House', which stands on large property on a hill along highway 2, on the western outskirts of Brighton. Have a peek; the setting is stunning, the house impressive.

I have been able to learn a bit about the house. In the way of grand houses everywhere, owners have periodically put its substantial size and classiness to work. The caption on the photo I located on the Cobourg and District images on 'ourontario.ca'  explains that the home was built in 1873 by William J. Eyre. The house stayed in the Eyre family until 1878, when it was purchased by Sam Nesbitt. A make-over in 1922  added a sunporch and the porte-cochere. You can see the original solid square hip-roofed house with Italianate brackets and its memories of Tuscany watch-tower (dead-centre, we weren't getting too crazy here.) I'm trying to discover whether the Italianate details were added to a more British Classical original. Then there are the later documented (Colonial Revival inspired) additions. Here's a link to that photo - and hundreds more. 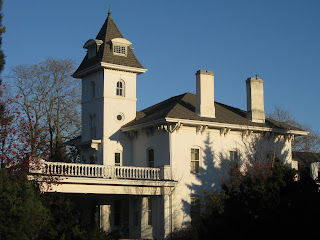 In the 1940s the house became a hotel, and later operated as a dining lounge and restaurant. The Cobourg site mentions an antique store here in the 1970s.

The post-card below, published with the kind permission of Mary Norton at Cramahe Digital Archives shows the inviting grounds and the substantial rear wing. What a place.

Hidden Ontario by Terry Boyle (Dundurn Press, 2011) contains an account of early Brighton (page 43ff.) Apples feature from the beginning, not surprisingly, but I chose to focus on the following account: John Eyre, a lawyer imported to bring order to the apple business, assisted with the founding of the Union Agricultural Joint Stock Company in 1873.

Here's what Terry Boyle says of the house: "Circa 1880 he built a magnificent three-storey Georgian house complete with a full basement, triple brick walls, open porches to the east and west sides, and turreted tower." So, there. the tower started out with the house, according to Mr. Boyle. Eyre died shortly after building his house (1889) and it passed to a trust company until 1898 when grocer Sam Nesbitt purchased it. Mr. Nesbitt established a canning factory and a reputation for resourcefulness around the storage of Brighton's famous resource. Sam renovated the Whitehouse as it was called by the 1920s, covering the brick (I'm guessing it was brick?) with stucco, and adding "a tower with windows to overlook his 53 acres." Well now, did he add it, or add to it? Which is it, Terry?

When Nesbitt died in 1938, the house, then called Grandfather's House, was converted to a hotel, Rene's White House Hotel. Manager Irene Dickson (Rene was her nickname) welcomed PM William Lyon Mackenzie King and show business royalty such as the Walt Disneys and ballroom dancer Irene Castle to the address. (Note to self: grab Bill Hunt's romance of flying history Dancing in the Sky off the Shelf, and reread the section where she appears. Go ahead, you do the same.)

And another thing. I'll go check out the Century Home collection. I am sure there was a visit to the White House in recent years, once again converted to a single family home. And what a home it would be. More later...

This is so cool. An AR visitor sent this link to a 1974 Montreal Gazette piece about the Langer family who operated the White House at that time!
Posted by Ancestral Roofs at 11:36 AM