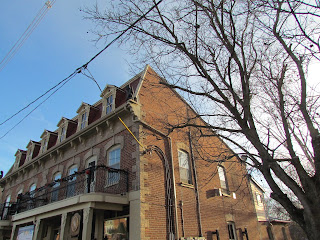 So, what do we call this? I asked Shannon Kyles, she of the Ontario Architecture website.

Second Empire, of course. We all know, and most folks love, the over-the-top mansard-roofed drama of Second Empire architecture.

This carefully restored brick building is home to some lovely posh shops in Warkworth (Trentmendous being a personal favourite, thanks to personable Dawn and Jim, proprietors.) On the face of it, the commercial building has all the Second Empire wow factors. 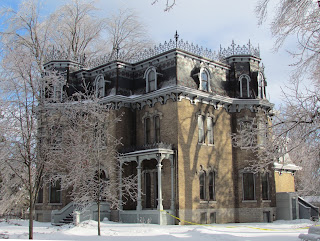 But it's a different sort, isn't it?

We all know at least one 'tall' Second Empire (my terminology.)  Belleville's Glanmore is a fine example of the verticality and drama of the style.

I chose this image of a 2013 icestorm adding drama to this elegant NHS, in honour of today's first snowstorm of 2016 (which I am enjoying thoroughly from my cozy spot in my writing room.) 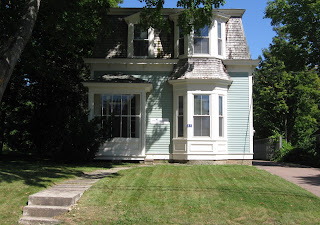 Then, if you look hard enough, you may find 'small' Second Empire. One day last year, I had a look at smaller scale mansard roofed houses, and recorded a few images in this post. This frame sweetheart from Sackville N.B. has it all - shingled mansard roof, a conventional dormer and a five-sided or Scottish dormer, a mansard-topped bay window, and a box bay (of newer vintage?) 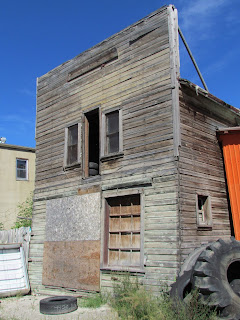 But back to the Warkworth example. It's a bit tall, a bit small. The most distinguishing feature of the building, to me, is not the expected SE elements, but that roofline, trending downward from the impressive facade in a workmanlike shed roof. I'm guessing it was a builder's solution to maximize the impact of the facade, and keep costs (and ceiling heights) down at the back.

Is this the same principle as that at work  on the false fronts of boomtown structures in the wild west? Here are a few in a 2013 post, written after a visit to historic Fort McLeod Alberta. 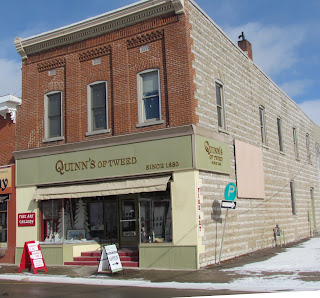 I think I'll call these shed roof versions Frontier Mansard (until I hear from Shannon, at any rate.) There are several more in Warkworth, one I recall in Norwood (photo not available.) Tweed has a beauty. Let's look about, I'm sure there are more. 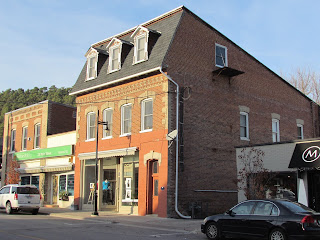 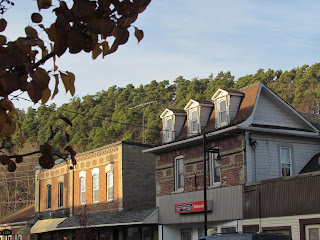 Posted by Ancestral Roofs at 10:57 AM