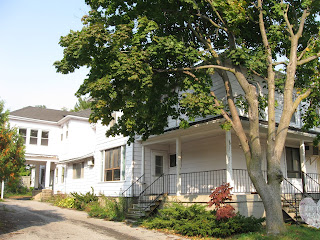 A short while ago I mused  about the old frame hospital in Picton. Personal histories, but always with a touch of architectural history creeping in. I was curious about the origins of the hospital, opened during WWI. The oldest parts of the sprawling complex it later became displayed a domestic scale, and a couple of details had survived.

I decided to contact Prince Edward County's old house guy, Phil Ainsworth. It's no surprise that he had information - and a surprise - which he generously shared. And he issued a challenge of sorts.

Despite my assertions (based on newspaper coverage of the 2011 closing, which included a look-back to the opening, as they do) that the house was the home of George Oscar Alcorn , Phil recalls it differently. And he should know. 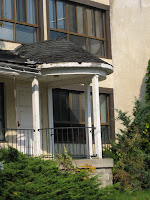 Turns out the house was the Holmes house by the time of its transition to hospital. Phil Ainsworth did a history of the Picton Library for County Magazine's Winter 2008 issue, and 'met' Eleanor Holmes, who lived here, and worked as Picton librarian for many years. 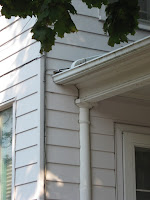 Phil gave me permission to use his photos. I am delighted to share them here. The pinkly fading Kodachrome photo shows the very porch roof I spotted as I visited the empty building. The verandah looks more inviting with its wooden balustrade. The post card Phil shared shows the  porch post I spotted at the corner of the verandah door in the ell. Today it's slightly buried in subsequent layers of siding.
And the challenge I mentioned? Phil suggested I contact Krista, PEC archivist, to track down the house history. He's a regular there. Phil's hobby business is doing house histories, a "labour of love-of-history." He's got five on the go at the moment, but if you want to know your County house story, you can contact him through County Magazine.
Posted by Ancestral Roofs at 5:15 PM