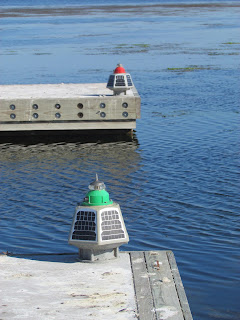 This is silly, but when we took Power and Sail Squadron courses a decade ago, one subject that was drilled into our land-lubber heads was 'aids to navigation.' Good thing too, as one's safety, and the pristine condition of one's hull, depended on it. One mnemonic which sticks in my mind is 'red-right-returning.' The learning is that going upstream, returning to a harbour, the red channel marker is on your right.

The example at left is the entry to the lovely Trent Port Marina, in Trenton.

So this red/green tension hit me, when I looked at my photo below. This is another place I intend to return to. The day's fading light, biting wind off the harbour, and my need for that street tree to sport bright green all guarantee that. That, and my abiding curiosity about the place.

This is the Prince George Hotel, at 200 Ontario Street in Kingston. I vaguely recall that the first time we saw it, it was part of a movie shoot, playing the role of a New Orleans Hotel. 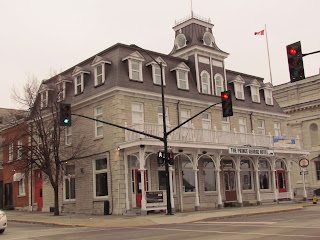 Streetview will have to stand in for  now. As you travel along the front, and up Market Street beside City Hall, you can detect the separate structures that were united into the whole that is the Prince George Hotel.

The hotel is featured as an example of Kingston's heritage renaissance in this Historic Places article.

One of the nicest things about the hotel is Tir Nan Og Irish pub.  Scroll down their Facebook page for some great Irish entertainment. And the menu ("elevated pub fare") is good too. My go-to is the chicken tikka masala boxty.

Soon as that tree at the intersection turns green...
Posted by Ancestral Roofs at 1:38 PM