Camped last week at Sandbanks Provincial Park; home before the weekend, beating both the rush and the change for the worse of the weather. One day I cycled along the beach road to the Outlet. The outlet is actually the mouth of a small river which flows from East Lake to Lake Ontario. The mouth of the river fills with sand in the fall, and opens with the spring flow. Dad used to mark the passage of the seasons by the opening of the river; and his and mom's annual pilgrimage to the trillium woods.

For years people called the area, and this beach, the Outlet. Most of us still do, despite its being subsumed into the greater Sandbanks Provincial Park. 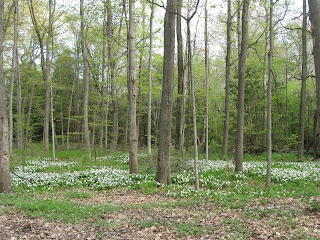 So I checked out the water levels (high) and the trilliums (splendid.) On my way back to camp, something made me stop and ponder the OHT plaque in front of the park store. I admired the store's iconic field stone and dark brown cladding, the fieldstone planters and massive chimney. The building has been expanded in recent years to house our increasing appetites, with a camping supply store, and a quality food concession.

I got that feeling of being where it all began. I'll explain why. 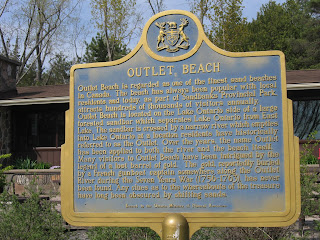 Outlet opened as a provincial park in 1959. I began in 1947. The beach was a big attraction, although I can't remember too many family visits there. One or two picnics with McCornock cousins, our mothers laying on dining room quality/quantities of food, dying with fright every time we disappeared in the breakers after the obligatory hour wait to swim.

This is what family outings looked like in the day. My grandmother in pearls, grandfather and great-uncle ingesting cold tea from a glass jug. 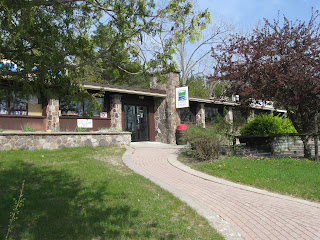 Locals had been campaigning for provincial protection for the beach area since the early 50s, I read, given the general misuse to which the beach was being submitted, with cars driving from Martins, a resort on the river, out onto the beach, and folks spending time there without benefit of washrooms or change rooms. Invites all kinds of disorderly conduct. 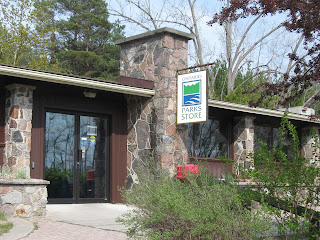 Shortly afterwards, Sandbanks Provincial park was established, and the two eventually fused, gobbling up good farm land for campsites (one of them mine, so I can't editorialize here.)

But what drew me to stop my bike, and contemplate something so very familiar was the resonance. That building featured in a late 1950s photo of our grandmother's car, parked in front of the shiny new park concession. Notice the fieldstone chimney, which now sits in the centre of the expanded building.
The cladding of the time was rough-edged brown-painted cedar (still to be seen at one of the Presqu'ile beaches.) See the brown picnic tables and those slant-top posts in the sand? Tradition. Notice the Maple Leaf flag? Too soon for that. Note the crowds? No, well. Those will come, too...the photo is almost 60 years old, after all. These days, electronic highway signs inform beach-bound hopefuls when the park is filled to capacity.

Posted by Ancestral Roofs at 4:00 PM