Some time ago, in March to be precise, I went on a bit about one of my favourite Picton streets, Mary Street. Mary is unusual in that it appears in several spots through the southern part of town. West Mary is the section I visited in my last post.

The part of Mary Street which runs eastward from Picton United Church is called East Mary on the maps, not surprisingly. Somewhere in my memory is Short Mary. I will investigate on my next wander through that old part of town; there's an interesting rubblestone house I want to explore further. 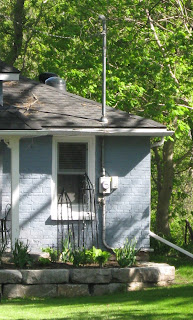 But for now, here is the little brick house I mentioned at the end of my March ramble. Unfortunately, there is a car parked in front, but I can live with that, in that it likely belongs to folks who purchased it (the Streetview photo still shows a realtor's sign out front) and tidied up both house and property (I had a secret fear that someone with little imagination might buy it, knock it down, and put up a four-plex on the wooded site.) I like these folks already.

What I really like about this snug cottage hiding at the end of a long sloping well-treed lot is recounted in The Settler's Dream. Stokes and Cruikshank give the house special attention, as well they should. They note the unusual form of the brick cottage: "a storey-and-a-half with a peaked gable over the front door, quite unusual for a hip-roofed structure." They mention the flanking single-storey wings, a symmetry recalling to me the Greek temple form. 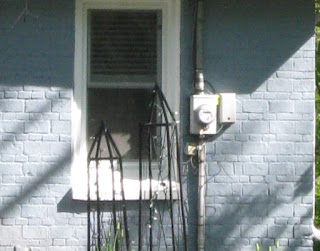 The feature that distinguishes this wee house even more is its brickwork, currently covered with handsome blue paint. This is another of Picton's unique row-lock bond houses, bricks laid on their edge, a style made 'famous' by the Welch brothers. I've written about this brick construction a few times- in the March post I mentioned above, and if you're in a brick mood, you could visit here, here, and here. There's even an example in Port Britain, with some very interesting PEC connections.

This house sports rowlock bond construction with a twist. It's the only example in town where "row-lock courses alternate with headers laid conventionally to create a series of continuous horizontal cells or rectangular tubes encircling the building." Bands, I would suggest. Can you see them in this photo? 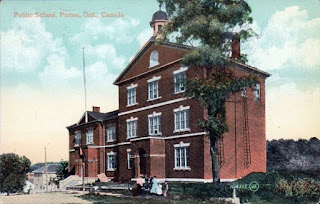 SD goes on to relate that the cottage was built around 1859 for Picton schoolmaster William Donnelly and his wife Margery. I have been unable to find the dates of the old Queen Mary Public School just up the hill on East Mary, but it's intriguing to think one of its staff might have resided here. The cottage would have been a great spot for someone teaching nearby.


I'm sure I can recall this school building from my early days. Pictonians, let me know? Now the empty space offers free parking, with a million dollar view. Wasn't always such a great view, as I will recall the next time I write about East Mary Street, and its industrial past.