Zucchini bites and other treats 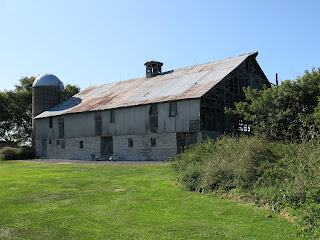 A long over-due lunch and walkabout (well, drive) with history friend Jane found us in several charming villages along the Salmon River yesterday. I had wanted to explore Camden East more fully since D and I discovered a beautiful barn of heroic proportions on a too-wintry-for-wonder day in February. My soul was also drawn to picturesque little village, and I was delighted to revisit - and to explore the tearoom, which I had enjoyed once years ago, in another iteration. 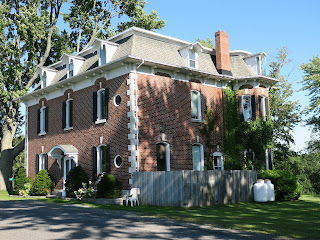 I think the loveliest thing about river towns (like Newburgh and Lonsdale, whose praises I have sung on many occasions) is the topography. Over eons, the Napanee River carved itself a deep cosy valley, and c19 town builders were obliged to honour the dip to the all-important water power, building down hills and along the twisting watercourse. Streets follow the twists and turns of the river, creating baffling intersections with roads out of town taking off in all directions. Delightful bridges cross and cross again, providing lovely views. 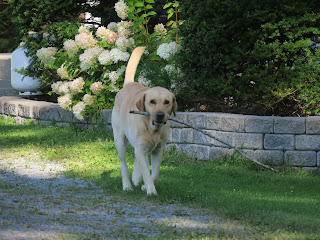 I cannot find any Camden East history at this point, but for a Wiki nugget - first settler 1800, first sawmill 1810. Samuel Clark's wool and grist mill additions warranted the village's christening as Clark's Mills. Post office built 1832 (which building, the fine stone store/post office?) Name changed to match the township, which had been organized in 1787 and named for Charles Pratt, Earl of Camden. (Could have been Pratt's Corners, I suppose, which would have been unfortunate.)

We crossed the inevitable bridge and walked up the hill along County Road 4 to Queen Victoria Street to have a look at 'my barn' and the lovely brick Mansard roofed house near the corner. The charming resident yellow lab trotted around the corner, and emerged hopefully with a stick. We didn't bite.

Beside the red brick St. Luke's Anglican Church  outfitted with battlements and machicolations against the possibility of attack is an OHT  plaque honouring writer Sir Gilbert Parker (handsome devil.) I knew nothing of this writer (whose father was storekeeper in Camden East) until several years ago when two local actors did a staged reading of some of his work for one of our Friends of Glanmore meetings. How interesting to find his hometown. 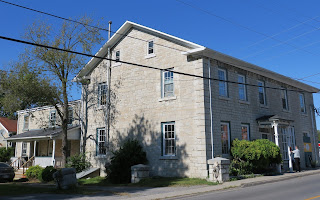 We had saved Camden East 'til last, venturing further up county road 1 to Yarker. More on that later. On our way home, thirsty after walking in the surprising heat and several hours of non-stop talk, we popped in to the old general store/post office, recently reopened as a tea-room, The Old Bookstore Cafe. If there were ever a spot - and a host - deserving of a shout-out (and of loads of success) it's this cafe in the old stone building at the crossroads. 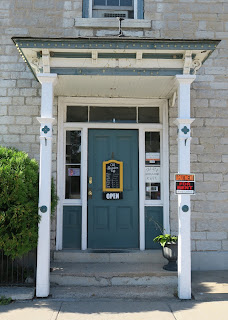 As we sampled some very original thirst-quenchers, Bonnie called over and asked if we'd like to try her zucchini bites - "because my vegetable lady has a lot of zucchini." Toothsome. A brown bag to take home. Great with white wine. Guarantees of a return visit. Bonnie Goloway, Camden East local, was written up in the August 31 issue of the Napanee Guide. She is committed to creating a community space, as well as a spot for all day breakfasts and 'a modest lunch.' Bonnie is committed to using local producers for her ingredients, and to showing the work of local craftspeople. Music and workshop plans are afoot. Bonnie strikes me as a hard worker. All she needs is us, to make this a great success. Check out the oldbookstorecafe Facebook page for notices. And just show up.

The building itself is worth a close look. We were awed by the ceiling heights in the vast newly freshened gallery space with its gleaming floors, and huge windows with dado panels. The massive doorcase, the deep mouldings, the dizzying height of the staircase, oh my. Beautiful exterior stonework. Bonnie told us that the store and many of the area's beautifully crafted stone homes were the work of a fellow based in Odessa, who walked to various villages, and stayed there until each structure was complete.

The stone store was the headquarters for Harrowsmith magazine, from its founding by James Lawrence in 1976 until the 1990s - I recall the change in flavour when it moved to Toronto. I missed capturing the facade, but asked the folks at Streetview to give you a peek.
Posted by Ancestral Roofs at 12:09 PM