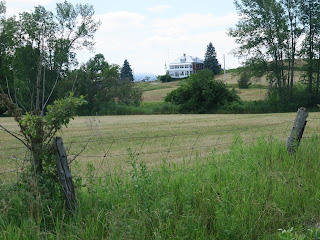 A little over a year ago, July 2018 as it turns out, I explored some the self-described gems of the Rideau (although you wouldn't get any argument from me) thanks to a little pamphlet painstakingly researched and carefully printed by the good folks of the Heritage Advisory Committee of the Township of Rideau Lakes. Today I came upon this file of photos, and I love them still.

Although it's always tricky combining combing the horizon for architectural stories and keeping between the ditches, I managed to find a spot to pause and ponder the Robert Leggett Farmstead along Crosby Road. 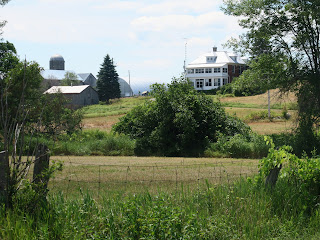 The homesteader's story was played out on this hilly farm - a drumlin of rich soil, legacy of the glaciers - enough to produce some wealth, or at least the optimistic growth of a large barn quadrangle. It all started with a log house of course, in the way of such things. Then later, in the 1860s, a hopeful plain frame house.

By 1907, a fine brick foursquare house with a proliferation of dormers, and double enclosed porches obscuring some likely pretty fine brickwork. The guide suggests "an Ionic-style classic revival appearance." Not sure what that might be, but I suspect there could be some some Edwardian classical influences under all that verandah?

Couldn't get close enough to see the bell the guide describes either, but it's said to have been on the roof, for calling workers in for supper.
Posted by Ancestral Roofs at 6:21 PM