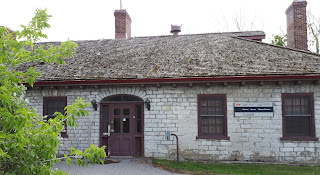 ...I was sneaking at first, expecting a challenge, then boldly, as I recognized this was 'my' property too, as a  citizen of Canada, and clearly I meant no harm. From my contemplation of the low limestone building (might these have been the Morton Distillery stables?) I turned my steps uphill toward King Street West, along an unused driveway, and everything changed. First, the stone building I'd viewed from the Tett Center parking lot revealed an elegant facade with a lovely elliptical fanlit doorcase; it was labelled the 'Morton House' but is actually called Grant House (aka Building # 10) in this document . I wonder if the simple yet stylish limestone building now overwhelmed by parking lots was the family's first house?

(Morton's biography was fascinating- one of those c19 giants of industry, in those booming, risk-tolerant days. This link to the Dictionary of Canadian Biography entry reveals a business collection with Isaac Buchanan of Auchmar, Hamilton, another visionary.) 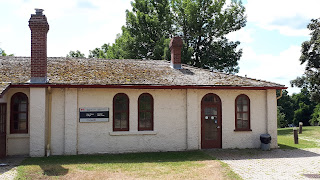 To my left opened an expanse of dessicated lawn, bordered by no fence, posted by no unfriendly signage. A low yellowish stucco building appeared, displaying neo-classical affectations and fine chimney. It was labelled the Red Cross Lodge. 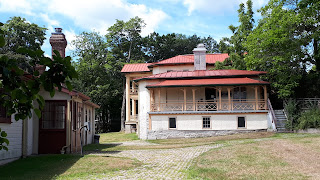 I gave the building less time than it probably deserved, as I was drawn toward a large slightly down at the heels stucco yellow house gracing the crest of the slope, the very hill I had recently  navigated down and back up, next door at the Tett Centre, for coffee at the Juniper cafe, enjoyed from my perch in a lakeside Muskoka chair.

I  noted Regency details in an overgrown verandah, and was gob-smacked when I crept around to the southern elevation to find full Regency Villa grandeur overlooking the lake. This was St. Helen's, the home purchased in 1858 by distillery/brewery owner James Morton as home for his family, and christened Mortonwood. A classic 'Picturesque Regency' dwelling, it's featured in Janet Wright's 'Architecture of the Picturesque in Canada' (1984, Parks Canada.) She enthused: "St. Helen's was one of the finest products of the retreat into the suburbs which became the fashionable practice for wealthy Kingstonians during the 1830s." p.97 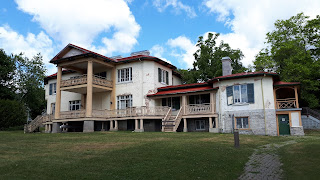 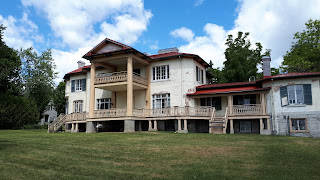 Kingston notables William Coverdale and William Newlands and sons are listed as builders on the Federal heritage designation.  The house was built in several stages, which may explain so much talent being employed.

Not that it's immediately apparent, but the second storey at the west side of the house (with the delightful oriel window) is said to have been added by a later owner, Edward Pense, sometime after 1907.

The monumental portico was added by Morton, according to one article I came across. I am still struggling with the portico appearing before the second storey; I expect it was a simpler awning roofed type in that iteration? 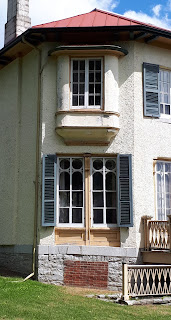 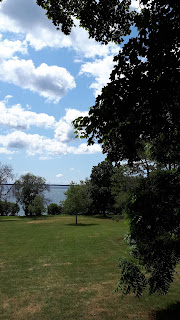 The Regency relationship between the house and its surroundings is a delight, even now when landscaping is strictly budget. Left, the oriel window, and the view from it.
Another later addition to Morton's house is the porte cochere on the King Street side; it was built by Robert Barrow, who bought the house when James Morton went backrupt, around 1864. 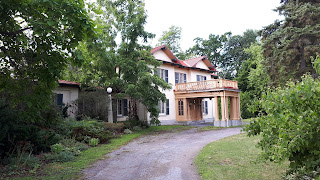 Sadly I didn't get a photo of the wonderful ironwork fence along the street. Here's what Streetview saw.


Here's the full 1988 Parks Canada designation statement. The document provides loads of facts; it'll be up to me to provide the emotion. For starters, their name for the house is 'Building No. 1, or the Main Building' of the St. Helen's Complex.' It's a 'Classified Federal Heritage Building, ' sitting unused, but bless 'em, not fenced off, so that someone like me can pop by to show it some love.

Sadly, in that 'dog in the manger' way the Gov. has, the building is unused, but falling into disrepair. I have found some reference to a proposed residential development in the property between the house and lake, which would destroy the Regency setting, but would help the old girl pay the bills. (I think of Brockville's Fulford Place; if you didn't have a feel for these things, you might not recognize that the property once extended to the water's edge and the posh boat-house on the river front.) Anyway, not to be self-righteous, this sort of Federal/Municipal dance is a slow one indeed.

St. Helen's (named for the wife of the original builder.....) The house and property are still SO beautiful, all the Regency values of setting and the blending of built and natural elements, the flow from indoors to out, the view, the trees - all a bit unkempt, but breathtakingly beautiful

Also on the property is the Red Cross Lodge. Clad in matching yellow stucco. I overlooked it at first, but its matching colours and classical detailing called me back. Here's its Historic Places listing; expect it was a domestic outbuilding of some sort - before it too saw war service. 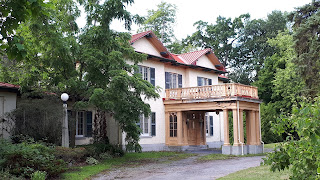 Watch this space. Here's another of Kingston's Federal Correctional Services properties in limbo, untouched - in both good and bad ways. The fabric remains, still restorable with great dedication and dollars. But time is passing. What will the future hold for this lovely spot? *

*I've quoted the most excellent blog Spectres of Kingston Past on this site before. Blogger Francesca Brzezicki posted only from 2014-16 (she mentioned she was a student,so perhaps that phase ended?) but there's lots to enjoy. Her post dated July 2014, entitled "What's up with St. Helen's?" has some great photos. Her December 2014 update mentions that St. Helen's property was vacant for three years - now at 8 by my reckoning.

**This 2015 City of Kingston Report to Council reveals that the Government has declared it surplus. Haven't found anything online to give hope. Have you?
Posted by Ancestral Roofs at 12:21 PM