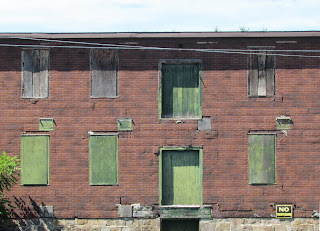 I have spoken about Brighton-based historian and genealogist Dan Buchanan several times on this blog. Dan's recent book 38 Hours to Montreal inspired this post, and a return later to Fralick's Inn in Morven.

I love to listen to a true history geek, and Dan is the consummate one; he's known as The History Guy. Dan's presentation style is informal and informed - two weeks ago in Brighton he regaled a crowd with stories of area folks (which would have been even more interesting had I known any of them) accompanied by photos from the fascinating Brighton Digital Archives (visit at http://vitacollections.ca/brightonarchives/search.) Dan manages to convey to his audience the appeal of historical research - the hunt. A history friend at Marilyn Adams Genealogical Research Centre (my new volunteer calling) dubs it "going down a rabbit hole." 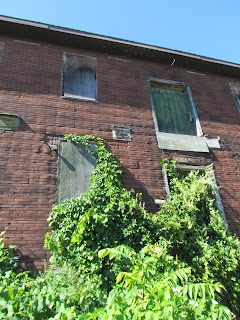 Dan spoke about this former bustling insulbrick-clad warehouse, once a grain elevator and apple cold storage complex with its own railway siding, in the great old days of railway commerce in Brighton, Ontario.


He used an expression that I wish I'd thought of: "Old buildings are like senior citizens - not as active as they once were, but full of stories." I've thought that all along (since I began this journal in 2010, a short, in history terms, 10 years ago) but never said it quite so disarmingly. 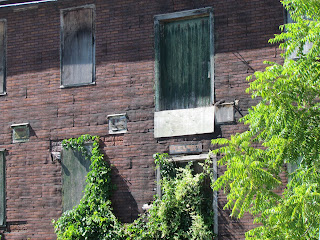 I love the building for its aesthetics, to start with. The patterns of the many doors and windows, once used for loading/off-loading hampers of apples bound for England, boarded up with faded green plywood. 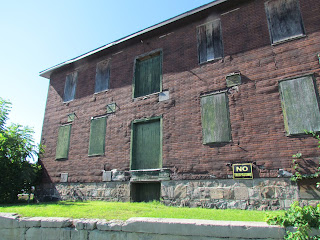 The texture of insulbrick, and occasional pressed tin siding bit below peeking out. The patterns of decay, crumbling, brokenness, which prompt so many folks to "tear down the old eyesore". 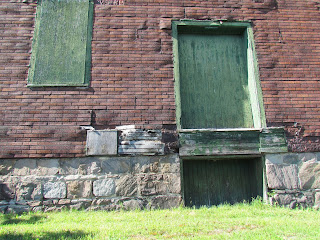 Nature reclaiming the property, wild grapevines inching up the wall, grass paving over the former clinker strewn tracks. I love the strength of the foundation, massive blocks of granite (I think) and some fine courses of smaller stone. 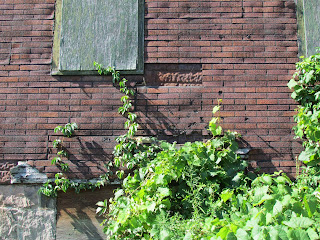 Long-time Ancestral Roofs visitors will know of my love affair with Insulbrick siding; newcomers might like to revisit  Vennachar or other stops on my insulbrick quest in Hastings County.

These days, now that I have stopped actively looking, insulbrick examples leap out on every country drive. 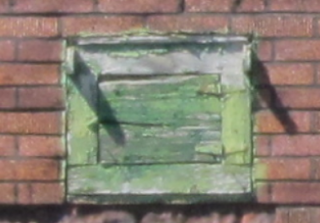 And this is a fuzzy closeup of one of the tiny tidy doors which appear at regular intervals along both the front facade and the rear (thanks to Dan checking the matter out) of the old warehouse. Curious little things. Whatever for? Should we find out, we'll be sure to let you know. And should you know...well, there's a contact email on the blog homepage.

There. I've delayed long enough. Let me share a couple of Dan's stories about this old "senior citizen" in Brighton.

This was the Butler Warehouse. William Charles (W.C.) Butler was the middle generation of three generations of Brighton 'nation builders' who put Brighton on the map in the late 19th, early 20th century. Nation builders.


The warehouse once included a grain elevator, visible in these wonderful old photos (labelled, should there be any doubt.)

Wharves and warehouses handling Butler grain are listed as operating from 1893 - 1930 in local historian Susan Brose's exhaustive compilation of Brighton businesses from 1819 - 2009.

Fruit storage was the other reason for the complex, completed in 1899. Apples from Brighton's orchards filled the barrels filling the warehouse, waiting for the train to carry them to Montreal, and the ship headed to England. Glory days. Now the old building stands idle, waiting for someone to stop by, like an old-timer at the local nursing home, full of stories of one of the families who built Brighton, three generations of  Butler menfolk. 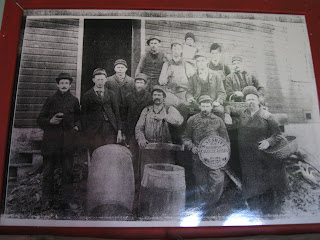 At Memory Junction Museum, now, sadly, closed due to the passing of its creator Ralph Bangay (a lost opportunity for Brighton, but what do I know?) I saw a photo of a fruit market in London England, with stacked barrels of Canadian apples.

Behind that story lie the stories told by these two photos, from the walls of Ralph's museum. 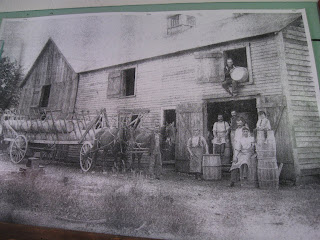 A story of working men, proud of what they had created with their wits and strong backs. 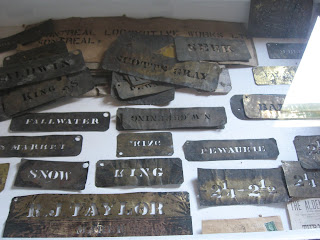 In one railway car gallery, Ralph had collected memorabilia from the heyday of Brighton's orchard dominance. These are stencils, for painting the apple variety onto crates (crates superseded barrels) Dad had one with the initials C.B.P. brushed onto it, identifying the apples or tomatoes so hard won as the property of one Clarence Bertram Pierce.(I probably should have kept it when we closed mom and dad's final home, but correctly judged that it would have sat idle.

And this is a photo of a photo (for which I make no apologies) from Ralph Bangay's collection, of yet another view of the Butler warehouse. 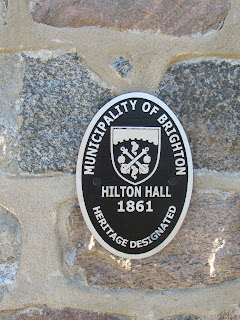 So, a shout-out to historians and collectors of stories from our shared past, waiting for the rest of us to ask the questions. Special kudos to the folks at the outstanding Brighton Digital Archives, volunteers who have taken it upon themselves to preserve history. They're growing on people. They've become a committee of council (good on ya, Brighton.) They have their own home base (the old Hilton Hall.) Their own BDA Facebook page. The group even presented at the Ontario Library Association Conference in Toronto earlier this year. 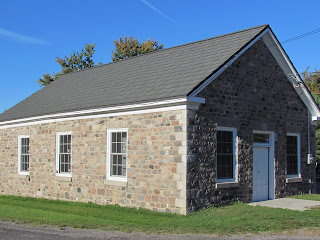 And do visit their site. Bring some images or documents to scan (exclusive offer, Brighton and area readers.)

And the next time you see an abandoned structure, stop for a moment. Look past the signs of decay to the wisdom of age. Pause and ask what stories the old place might have to tell.

Posted by Ancestral Roofs at 6:42 PM