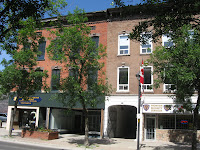 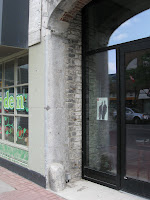 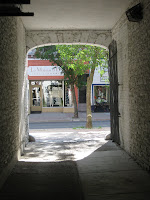 Yesterday I spent an enjoyable half hour photographing the old commercial properties on the east side of Front Street - those with their faces turned to the afternoon sun. I used as my field guide the fine little HCHS booklets entitled Belleville's Heritage.
Later, after a respectful pause for a slice of decadent rhubarb and sour cream pie at an outdoor cafe, my artist friend and I explored lanes and alleys, she looking for patterns to inspire her, I searching for old stories in the rubble stone walls at the backs of the old commercial buildings and in the carriageways. Belleville is fortunate to have a number of these passageways - as you travel their cool darkness, you can almost hear the footfall of tired carriage and dray horses being led to the stone stables behind the buildings.
Last year, I was writing an article about the heritage commercial buildings on Bridge Street. Building owner Paul Dinkel pointed out the curbstones which he had retained when glassing in a carriageway in one of his buildings. Still it stands, a vestige of the days when building owners prevented damage to stone walls from carriage and wagon wheel hubs by placing stone barriers at the corners. (photo at left)
The middle image shows an open carriageway on Front Street, with the curbstones still in place, though unused and unnoticed in the busy shopping and socializing going on closeby. The limestone walls echoed our busy chatter as we took advantage of a brief respite from the late afternoon sun.
The photo on the right shows a commercial building further up the street. There is a plaque above the carriageway arch with the date 1863. This building could well have been a hotel; there were many in that area. One contemporary hotel which stood nearby, the Albion, was established in 1869. It reportedly accommodated 40 guests and provided stabling for 250 horses. I'll see what I can find, when next I have a copy of Buildings East of the Moira in my hands. For now I will have to content myself with this portal to the past, and its invitation to rest for a weary team of draft horses.
Posted by Ancestral Roofs at 11:39 AM