I spent yesterday road-tripping in Prince Edward County, communing with the ancestors. 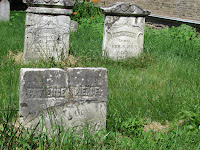 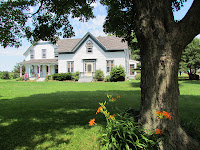 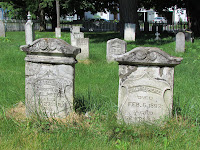 The gathering of the clan on the left is found in the picturesque and evocative graveyard of the old St. Mary Magdalene Church. There is a heart-breaking story told by some of these stones - of the 1866 death of 5 of my ancestors, young Patience and her four brothers, children of my great-great grandfather Sam, drowned with two friends within sight of their family on the shore, on a sunny July day in a Smith's Bay pleasure boating outing gone terribly wrong.
Another stone memorializes my great-great-great grandfather William, the stone dated February 31, 1860. I have a newspaper clipping from the Toronto Evening Telegram, dated June 26, 1936 pointing to an "absent-minded stone-worker as the culprit", so it cannot be linked to any inability of my family to keep track of its landmark dates. The stone even made it into Ripley's 'Believe it or Not' column (slow news day). The marker was replaced by a replica after vandals, sensitive as they are to date anomalies, destroyed the original on Tom Kuglin's watch as curator of Macauley Heritage Park, some 20 years ago.
Along another road, I stopped to yearn for days gone by, along the roadside in front of the old family home. I have written about the family farm at Lot 50 Bayside in other posts, so I'll not detain you. Today, this is just a tip of the hat to Pat, who must have recognized the longing on my pointy little face, and invited my friend and me in for a wander.
Sure, it's somebody else's house. The little black dog was most insistent that I know that! And it's changed in its layout over the years. Back stairs gone, doors relocated, windows added, floors returned to their pine board origins, the entire original floor-plan opened up. Some things remain - the pressed tin ceilings, the upstairs hall with its west-looking window, the open hall layout upstairs in the east wing, and the tall windows, deep baseboards and window surrounds, front door with sidelights and transom, and the pointed arch window in the wide gable, all in the lovelier east side of the original double house.
But mostly there were echoes - sensory memories more than visual ones, I suppose, as I walked the shallow stairs to the room I occupied as a tiny girl, or lingered in the small side-room where my baby brother occupied the big brown metal crib, or stood on the front verandah and gazed out over the dooryard that was once my huge empire.
I thank Pat so very much for the opportunity to time-travel yesterday. I salute her and her husband for becoming stewards of this old house with all its loveliness and its crankiness. And I look forward to dropping by someday to share some family lore.
Posted by Ancestral Roofs at 6:00 PM