I'm still thinking about downtown.
Since my last two photo outings, I've been studying the intricacies of the finer buildings - Belleville's only wonderfully ornate cast iron front on the Henderson Building (1859 and unfortunately showing its age), the beautiful Victorian facade of the Corby-Caldwell-Greenley block , the pretentious Beaux Arts additions to the serene Renaissance front of the Jamieson Bone (Corby) Building: so much craftsmanship and beauty still, after all these years. 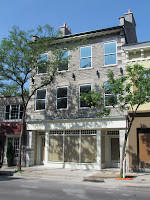 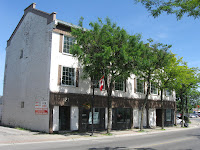 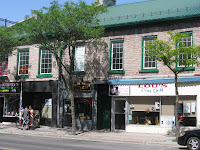 But the plain Janes that just don't have that 'wow factor', are my favourites today. Uncoursed rubble stone, parapet gable ends to prevent spread of the all-too-common fires, corbel stones, simple windows - most with modern unsympathetic shop front up-do's. Very old, they were here when our city was new.
Right: Turnbull Block (north section late 1830's) - large Regency style windows (replaced I think) , home to one of Belleville's institutions, The Cozy Grill
Left: The Commercial House Building (1838) - empty for some time, LEASE signs in the windows. Rather worrying.
Top: The Seldon-Harris Building (c.1832) - great chimneys. Is undergoing extensive remodelling by its owner, one of our old building champions.
As always, sincere thanks to the painstaking labour of Lois Foster and Beth Green, the Heritage Belleville researchers who put together Heritage Buildings East of the Moira (1991)
Posted by Ancestral Roofs at 9:21 AM