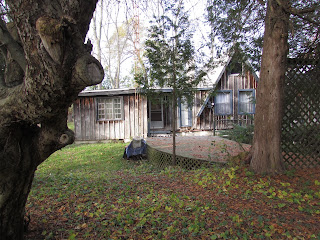 Al Purdy's A-frame is ten minutes across the bridge and down a side-road from where I live. He and I are from the same UEL roots....hell, as they say in that county, we're probably related. After all those generations, sooner or later you marry everybody's family. My dad and Al were born the same year. They would not have seen eye to eye...and would have been equally bullish over the disagreement. Dad didn't have much poetry in his life.

Dad would have called Al "rough" and "shiftless". Al would likely have found the proud hard-working tee-total farmer a bit stuffy. Both men, despite limited success in school, were pretty smart in life.

One day last week I spent time at the A-frame, the sharp wind off Roblin Lake, like a pugnacious male presence, warning me I wasn't welcome.

David W. McFadden described a visit to the A-frame in his essay From a Trip around Lake Ontario. Don't think I would have fit in, though maybe I could have helped in the kitchen.

Somehow I expected that frisson I experience when I visit the cemetery below the empty mill site. I tried to be in touch with the poet, the life and times, the poetry. They weren't there ...just a tired house sagging under the weight of all the stories it knows and wasn't telling me.

Who was I again?, the A-frame asked, bored and distracted.

Incidentally, David McFadden's essay about a visit to a thinly disguised Al Purdy, and  and Seymour Mayne's poem about Canada's most literary outhouse can be enjoyed in The Al Purdy A-Frame Anthology.

Posted by Ancestral Roofs at 8:22 AM