Trenton, Ontario was abuzz yesterday with the first-hand accounts of a dramatic downtown fire which closed streets and evacuated a school. Firemen were injured looking for a missing woman. The Sherwood Forest Hotel, a local strip club, will not be missed by too many folks.

But it might be missed by Al Purdy, for the Sherwood was once called the Quinte Hotel.
I went to Ameliasburgh today, intending to spend some time at the Purdy A-frame. Before I left the house, I reread the poem which immortalized this less than lovely hotel.  In his famous poem 'At the Quinte Hotel', which I cannot read without hearing the voice of Gordon Pinsent buzzing in my ear, Al Purdy writes


In the quiet of the Ameliasburgh cemetery, freezing in the unaccustomed cold, I told Al about the fire. I left a volcano-spawned stone, as I had planned. As I walked away I was drawn to the edge of the old mill-pond by a flash of colour. There, in the frost-killed brush and branches, lay a little yellow artificial flower, left over from someone's graveside beautification. 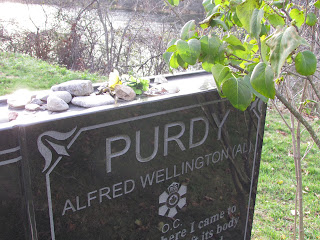 We pay close attention to coincidences in our family - I left the yellow flower with Al.


Posted by Ancestral Roofs at 8:23 PM