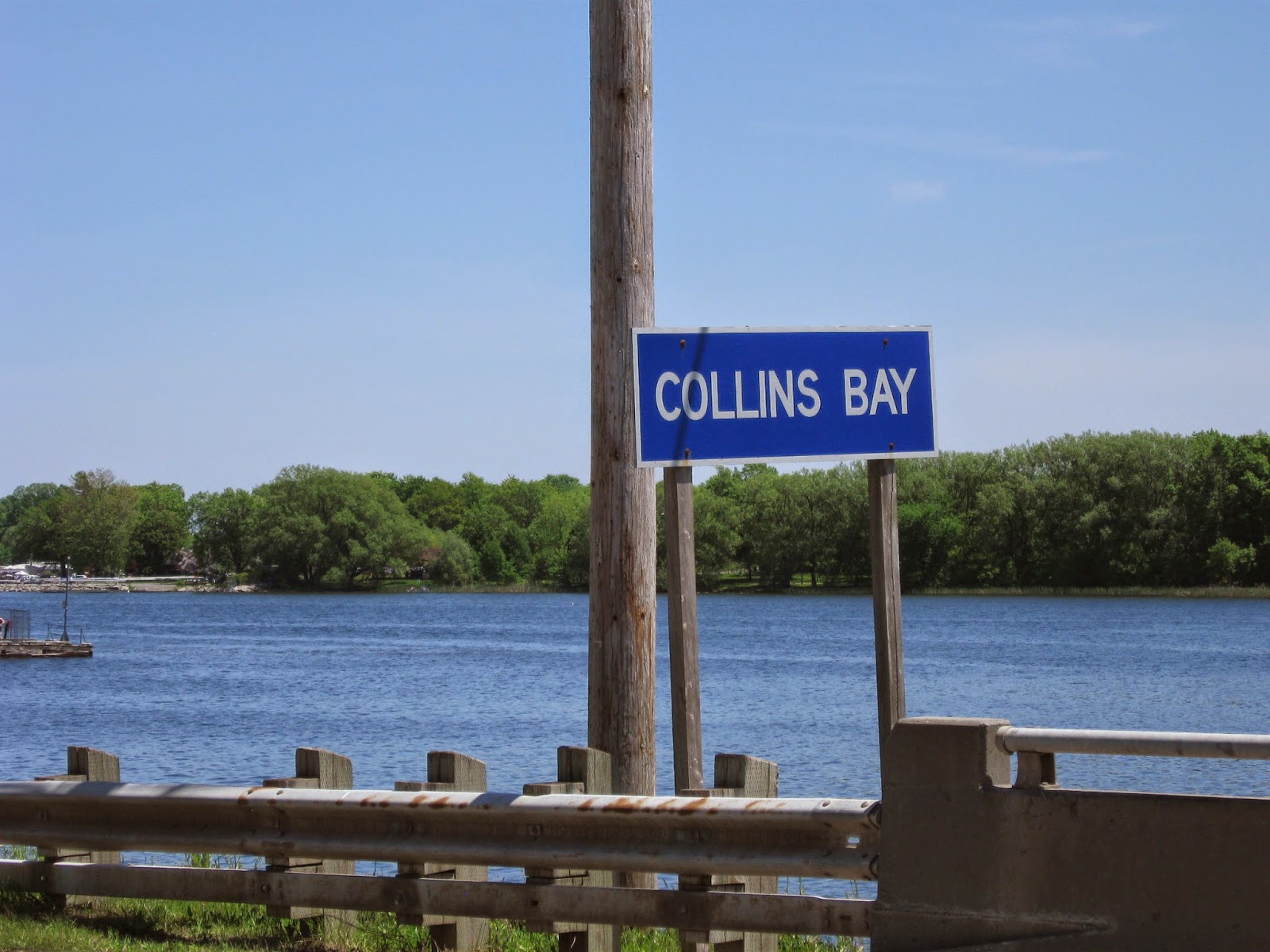 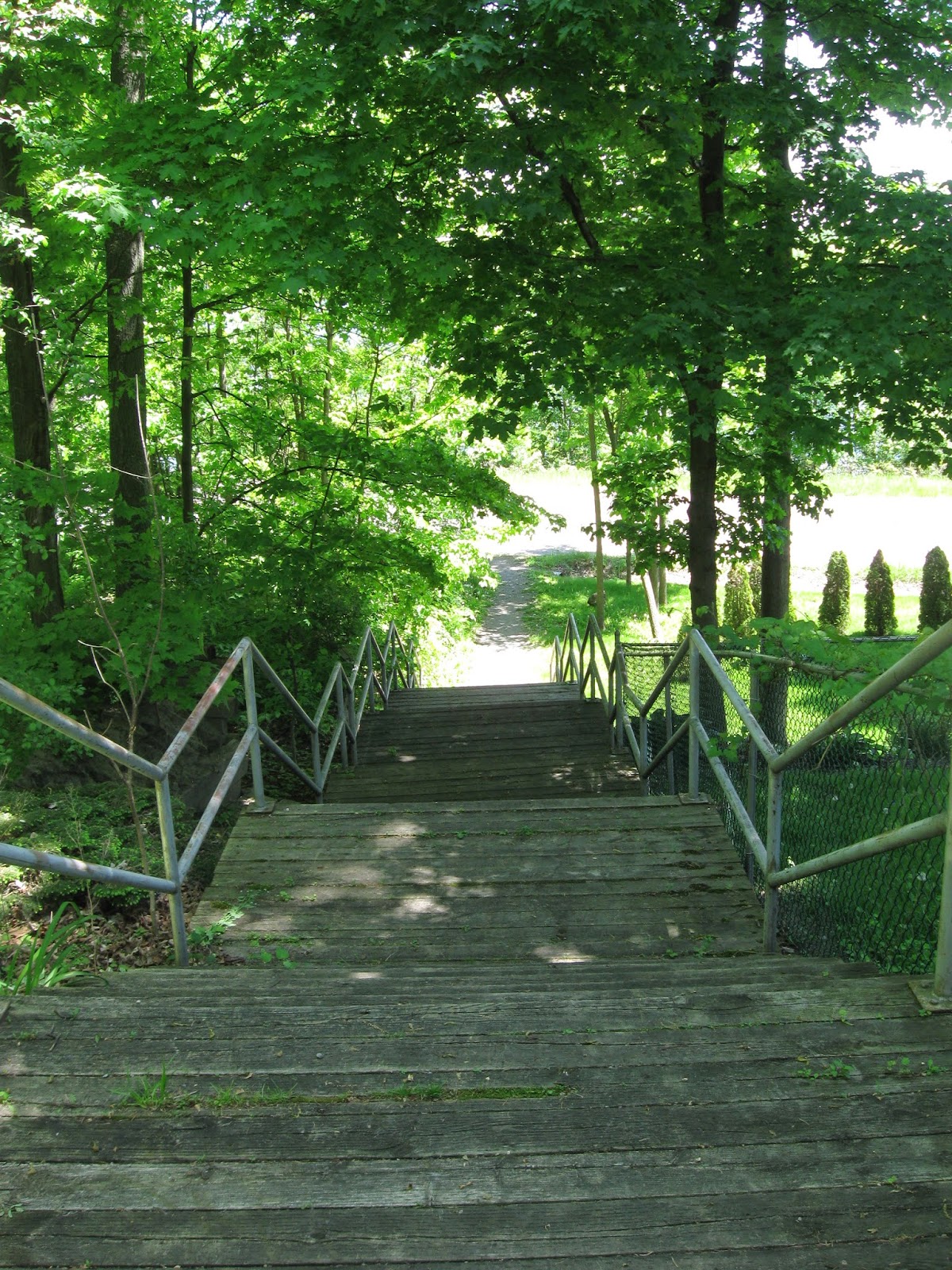 For years I have been intrigued by glimpses of warm grey limestone, a grouping of houses hidden in the trees, a short death-defying dash across Highway 33 from the Armco-protected shores of Collins Bay. But always the moment passes, the convenient and safe pull-off isn't found, and we speed by. But this time I was determined. Assuming that the surrounding 1980's 'not-gated but wishing we were' subdivision on the rise above the highway was severed from an original land-holding, I looked for a new street to give me clues. Sycamore. Tamarack. But no. Nothing but large comfy family homes, large comfy people. I parked the car, to dip into an old house history for a clue.

And looked up to see a couple emerging from the woods between two of the hillside homes...there was a trail! So I parked, and took the steep stairs down into a soft spring maple wood carpeted with Bouncing Betty...and exited into sunlight onto the slim path bordering busy highway 33, and the way to those stone houses.

So I politely snapped from the roadside, the only pedestrian for a suburban mile, and later made the acquaintance of these lovely homes and their stories in Homesteads (1979) by McBurney and Byers. 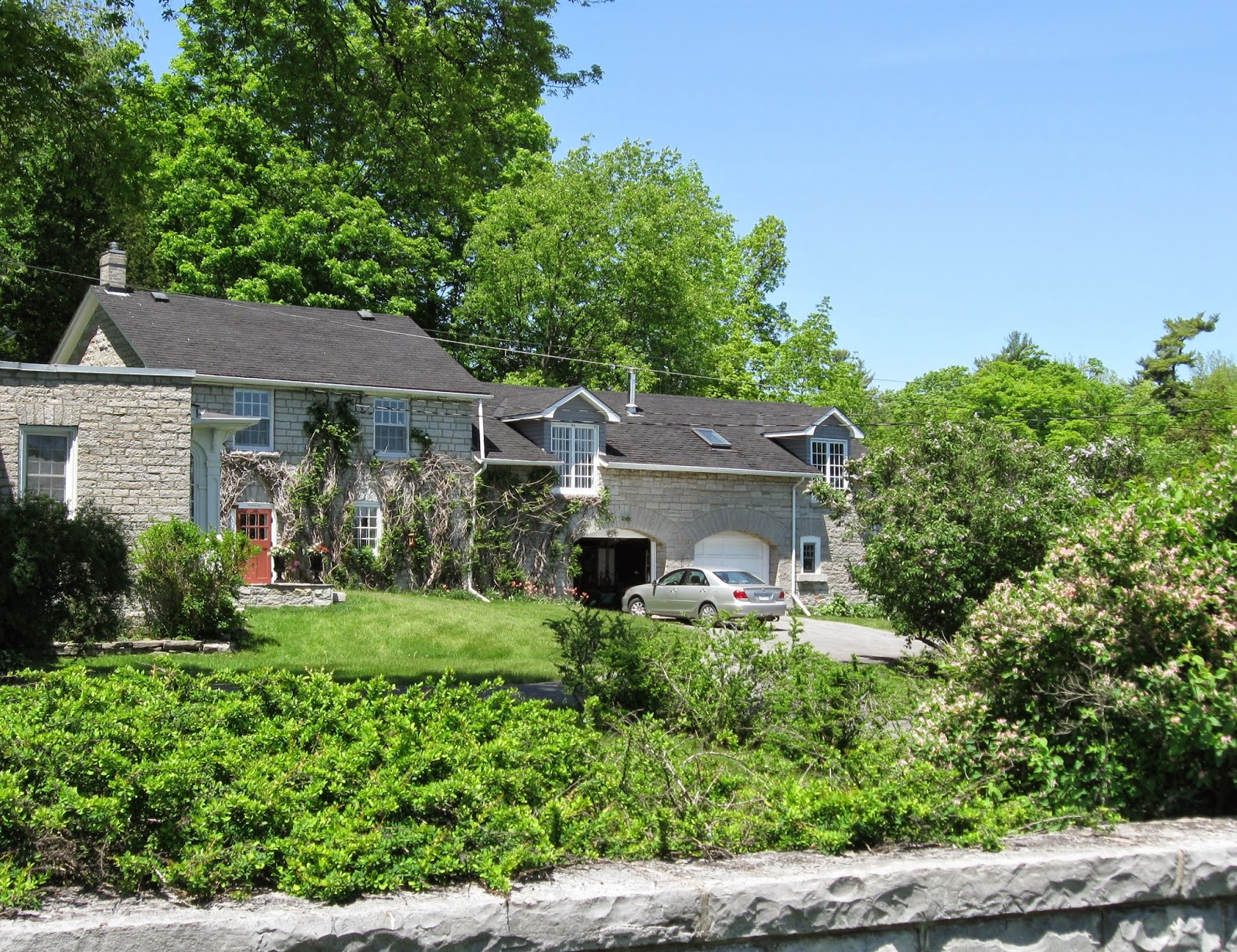 Remove the gingerbreaded porch, the modern verandah, the boxy addition and the roof dormers and you have the 1854 limestone house of bachelor businessman Anthony McGuin, grandson of UEL Capt. Daniel McGuin, who arrived with Michael Grass. Anthony's father built a number of the first mills in the area, and young Anthony managed them well.

An 1860's wing, and a later stone cottage and carriage house (see the filled in carriageways?) were added. The verandah, which masks the early character of the house, and roof dormers joined the establishment even later.


4097 Bath Road is the 1862 home of David John  Rankin, nephew of Anthony McGuin Jr. McBurney and Byers suggest the home was an enticement to prevent young David from yielding to the call of the California gold fields. Built in two stages, the formal L-shaped limestone house preserves its privacy in wooded grounds above hectic Bath Road, behind a stern limestone wall. 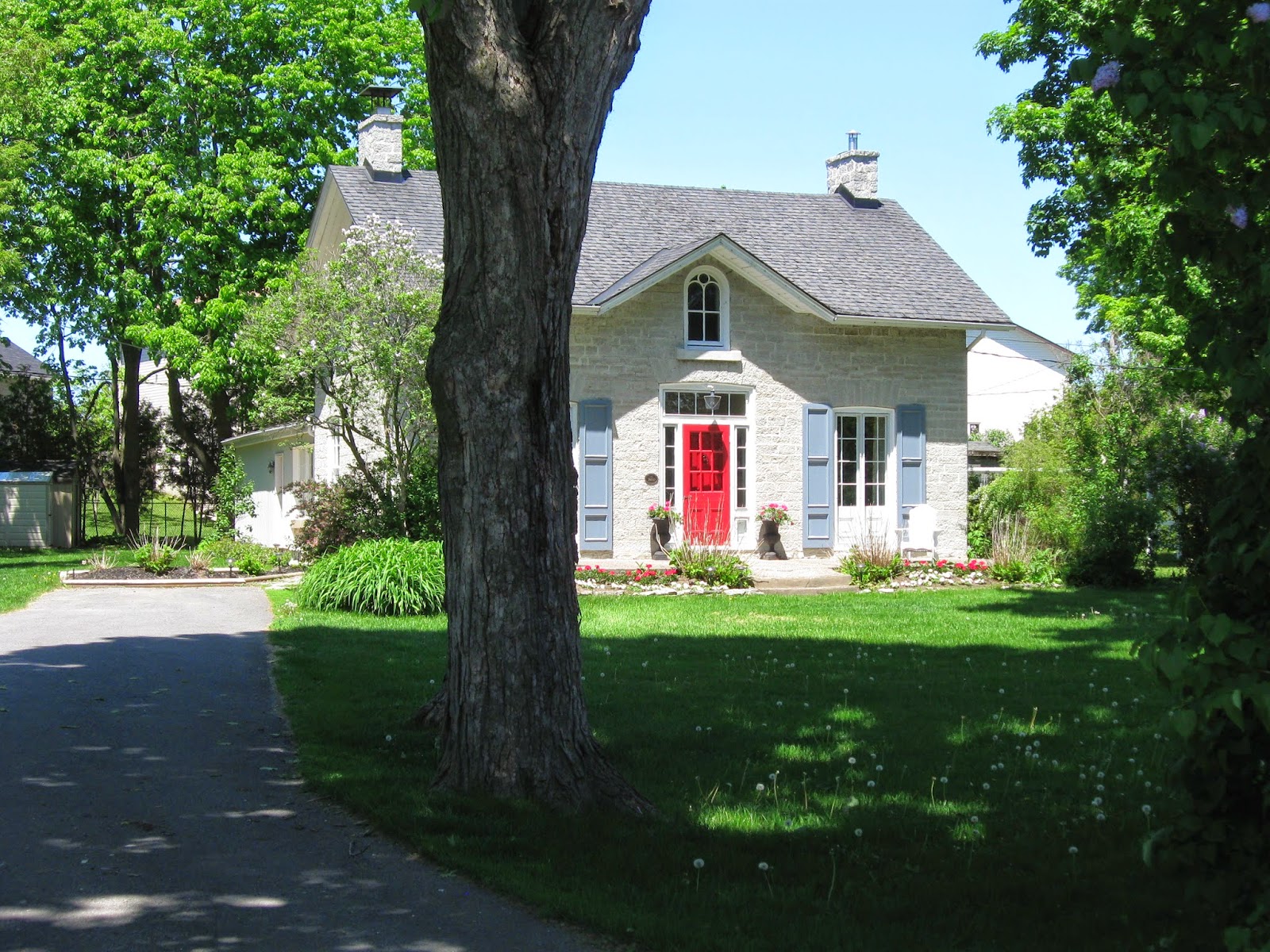 4403 Bath Road, yet another limestone in the neighbourhood was the c.1860 home of Samuel D. Purdy. My Al Purdy antennae start to tingle. "Samuel was a member of a prolific family which settled in the area after the Revolutionary war. His grandfather, Gilbert Purdy, had been a guide in the British army. After Gilbert's death in 1788, several of his children and possibly his wife left their home in New Burgh, New York, and came to Upper Canada." (Homesteads, p. 19) Samuel was the son of one of those children. 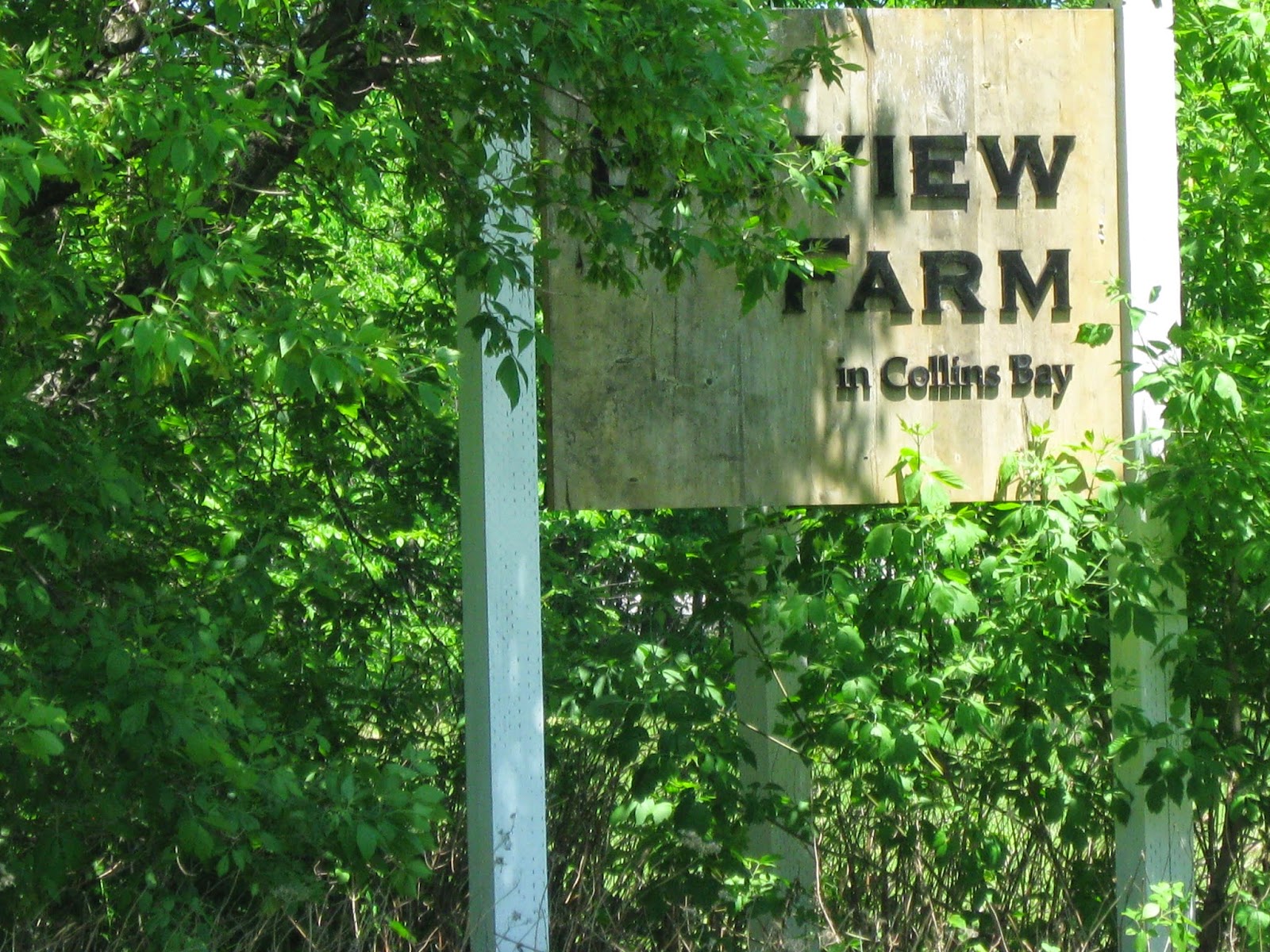 So many glimpses of limestone among the trees continued to tantalize, even after my trudge. There's Bayview Farm at 4085, with its deep lawns, treed avenue, and massive gambrel roofed stone house, almost invisible behind a screen of trees.               An internet search advertised a market garden at that address. Would love to visit. Next time. I'll be needing fresh produce.

Kingstonians! Feel free to contact me at the blog email, and put me out of my curiosity!
Posted by Ancestral Roofs at 3:33 PM