The benefits of Zinc 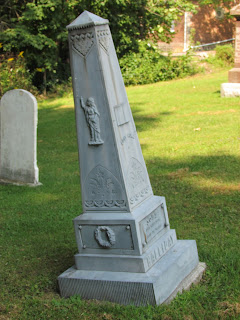 This crisply detailed obelisk in the graveyard of the former Presbyterian (1844) church in Grafton caught my eye. Although it's trying to fit in with its weathered white marble neighbours, there's something a bit too fresh about it after all these years.

I wasn't surprised when I tapped the monument, to hear a tinny ring. For this memorial is made of zinc or 'white bronze' cast metal. Jennifer McKendry (Into the Silent Land) explains that despite the manufacturers' claims that it outlived marble, the material never really caught on in Upper Canada/Canada West. There might be one or two found in the c19 section of many Ontario graveyards. Its durability was its (ahem)strong point.

I find the combination of floating high relief figures and low relief decorative floral and geometric elements with little connection between them to be a bit distracting. McKendry explains that plates were cast and attached to the base with special screws. Designs were chosen from the manufacturer's catalogue, which may explain the combinations of patterns. The cast iron front catalogues I've written about on occasion were similar. 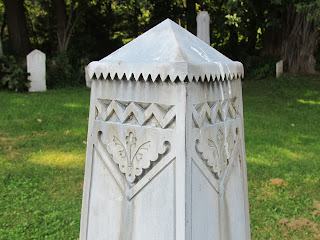 I believe that must be Hope, pointing - hopefully - heavenward. The other figure I didn't catch. Looks to be lurking in the bottom photo. There's a wreath, a bible, and the words 'Gone Home', The family name is Halliday, and the name above (dates unclear in my photo) looks like Joes.

I am annoyed that I didn't spend more time and photograph all the faces of the obelisk...the fact that it looked in danger of tipping over did distract. 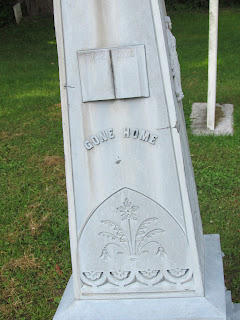 The top of the column is quite pleasing - the book states that the obelisk was typically topped with a finial. This tinsmith's tiny hip roof with pennant edge solution is lovely.

I didn't look for a maker's mark, although McKendry writes that they are occasionally stamped on. The Ontario manufacturer (1883-1899)  would have been the White Bronze Co. of St. Thomas which held the sole franchise from the Monumental Bronze Company of Bridgeport Conn. head office (1874-1912.)

Jennifer McKendry explains that white bronze and cast iron memorials are quite rare, and cites the few examples. She mentions a cast iron example in Belleville cemetery (which I have failed to find.) I'll resurrect this discussion later.

Posted by Ancestral Roofs at 11:50 AM