Frequent reader Mark suggested a post idea some time ago. He mentioned houses that had stood the test of time (and avoided detection and demolition) while a city grew up around them. They were likely isolated on a farm or estate when they were built. Now the city flows around their old-fashioned setbacks, large trees and lawns (like rushing water parting to get past a rock in the stream); they create an invitation to time-travel for those of us who stop to look.

I've been searching, but the best I can come up with are these two curious houses in Picton. While they are still surrounded by lovely neighbourhoods of well-kept heritage homes, they are distinguished by their orientation to the street, as they were built before their part of the new town was subdivided.

Both houses face Main Street East. Although infill housing over the last century has diluted the effect,  I suspect at the time they had a clear line of sight to the edge of the bluff overlooking the all-important harbour. What's unique about them is that the street does not run past the front of the house anymore, which rather dilutes the effect of their impressive front entrances. 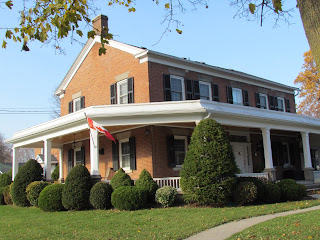 In the case of the house at top, you can travel along its side elevation (which was also oriented to this important street/road, thanks to two entrances in the kitchen tail) on Johnson Street. Prestigious Flemish bond brickwork, stylish eaves returns and splayed stone lintels, and a gorgeous doorcase with finely patterned sidelights and transom (alas, not shown in my photo, but described in Settler's Dream.) make it worth a closer look. The lovely verandah replaces an earlier trellis verandah.

The wonderfully parapet walled, corbelled, massive four-chimneyed house at Main Street East is in an even odder predicament. Facing Main Street, yes, like its peers along that prestigious old street. But the house now sits behind and slightly to the right of St. Mary Magdalene Church (1913) which is planted as it were in the front lawn. I only got to know the house up close, while singing in a choir group which met at the church hall, and parked behind. In the Streetview photo, if you let your eye follow the driveway back toward a pink flowering shrub and a grey car, you can spot one window and a warm glow of red brick. Think of that house rising on open farmland, back around 1835. 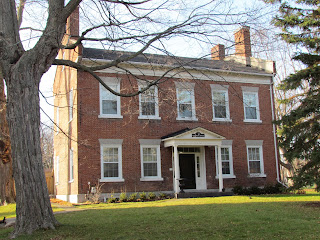 Stokes and Cruikshank (Settler's Dream) deem it "one of the best in the village...closest comparisons that can be made are with the house of William Macaulay." The deep cornice boasts the Greek key geometric pattern, and the portico with pediment has dentils along the raking cornice. SD mentions the paired modillions below the soffit, though my photo doesn't show any of those. Time to creep back to that church parking lot to admire this beauty.

As a postscript to this post, and in deference to Mark's original idea, I just revisited this story about a wonderful stone house in Kingston that would qualify as an early structure well and truly overtaken by the city! And surviving beautifully thanks to good owners.
Posted by Ancestral Roofs at 5:17 PM