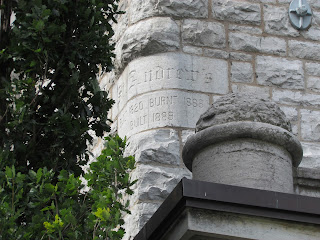 On a recent wander around old Kingston we came upon St. Andrew's Scotch Presbyterian
church. The first church on the site was built in 1820 with funds raised by the Presbyterian Society of Kingston, the Scottish Presbyterians of the day taking dour umbrage with the Church of England's assumption that it was to be the only church hatching, matching and dispatching. The gentlemen who had forged the Canada Act (1791) deemed the   C of E  the official church, and granted one-seventh of all land as Clergy Reserves. To see what trouble that caused, read The Rebels of Hastings by Betsy Dewar Boyce or any of a number of fine histories of the Rebellion of 1837. 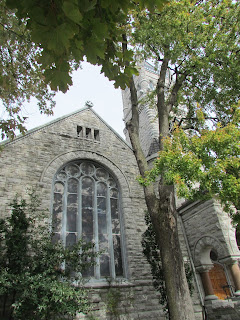 The plans for the development of Upper Canada were clear. The new country was to be modelled after England's privileged landed Church of England-adhering aristocracy.
A Governor sent from England, A Legislative Council, similar to the House of Lords (there were plans to make the appointments hereditary), an appointed Executive Council. Massive land grants were given to ex-military officers, with a class structure trickling down to merchants, farmers and labourers, parallel that of the home country.

The Family Compact. A few wealthy educated men took all the positions of power and appointed their relatives. Entitlement. Elitism. It's not something new. But I digress. 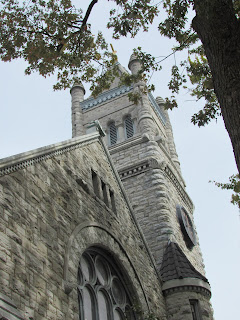 I tried to take a few photos of the church, conscious of keeping people out of the frame, to protect their privacy, and because it was all about the Romanesque Revival detailing.
As cold as we were, the folks huddled on the steps looked even more so. I wondered if it were just a gathering place in the sun, or if the small crowd was gathering for a hot meal, or a sack lunch.

It reminded me how so many of the downtown churches have taken on the role of feeding the hungry of their neighbourhoods. I just wrote an article about Bridge Street United Church in Belleville. For nearly 20 years they have had an active 'food ministry,' their aim "to fill tummies and warm souls." Thinking back to my childhood, I remember mom's UCW group raising funds to support the Salvation Army and Scott Mission. Funny, in those days, I thought the group receiving assistance was  somehow 'other.' Today I understand that it could be any of us.
Another inspiration on Clergy Street was the Manse built in 1841-2 for the Scotch Presbyterian Church's second minister. Reverend John Machar, whose life's work included forming free schools and starting the theological college which became Queen's University. 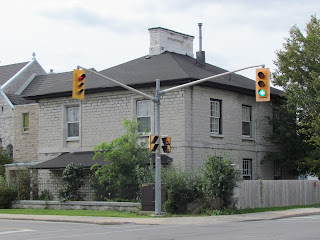 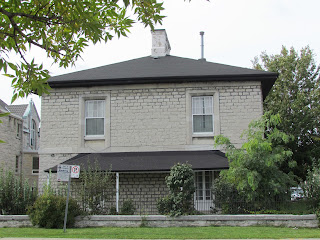 This is her description of the manse: "The rough ashlar of the walls is contrasted by the cut-stone surrounds to the windows and doors and a cut-stone string course. Thelarge windows have the original sash with the narrow outer panes characteristic of this period. The chimneys are grouped to form a single central stack on the roof. The wooden side verandah on the east is balanced by the kitchen wing and a stone wall on the west." (or at least that's the way it was in 1966 when The Old Stones of Kingston appeared.

I failed to photograph the facade, which opens onto the churchyard. Next time, when the wind isn't pushing me toward the warm sanctuary of my favourite bakery, I'll be sure to photograph the facade inside the church courtyard. Here's a Google view, which will get you the kitchen wing, but doesn't venture into the courtyard either.
Posted by Ancestral Roofs at 7:25 PM