2011 was my cobblestone house year. I wrote about the cobblestone houses of Hastings county for Outlook (HCHS newsletter, April 2011) then for Country Roads magazine (Winter 2011/12 issue.) Several posts on this blog during the end of 2011 and into January 2012 reflected that project. Building researcher Lois Foster has established that there are 14 extant cobblestone buildings in Hastings County.

Recently I discovered one which I don't believe was included in that count. But still.

And we'll always have Paris.

On Sunday we began our cobblestone research in northern New York state. It will take some time.

According to Rich and Sue Freeman, authors of the engaging road trip guide Cobblestone Quest, the area south of Lake Ontario stretching from Syracuse to Niagara Falls features from 600 to 900 examples of the approximately 700 to 1200 built in the United States.  Ninety percent of the cobblestone buildings in the US are within 65 miles of Rochester. 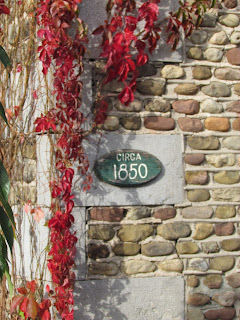 Sunday afternoon my guy and I did most stops on one of 17 tours the couple have outlined. Brilliantly. With maps, addresses and directions, photos, brief histories of each structure. I am considering moving to Wayne, Ontario, or Monroe county - they have a total of 378 examples. Or perhaps a camping trip next summer would be more manageable?

So. Biz trip for my guy to just south of Syracuse. Ignore the snow squalls for now. Don't even look at the dozens of original Federal and Greek Revival frame structures along every road. Begin our own cobblestone quest.


The recipe. Start with a cobblestone, a glacier or water-smoothed stone which fits into the palm of one hand. Multiply by several thousand. Lay in regular courses (vertically, horizontally, or diagonally) as facing on a rubble-stone wall. Play with the colour of the stones. Secure with elegantly beaded or vee'd joints of soft lime mortar. Add ashlar lintels and quoins if you wish. Adorn as you like. Apply this painstaking technique to Greek Revival, Gothic, Federal homes, or vernacular farmhouses.

Our tour took us to Elbridge, Weedsport and Cato in beautiful hilly, forested and early-settled Onandoga County.

The third-generation farmer owners of this outstanding pre-1834 Greek Revival farmhouse stopped to chat on their way indoors with the shopping. They are enthusiastically shouldering their responsibility as custodians of this important and beautiful piece of architectural history, and I applaud them. And hope to revisit when we resume the cobblestone tour.

The Putnam family arrived in the area in 1804 and built mills. The Freemans report that the walls are 18" thick. Cut limestone lintels, quoins and watertable, limestone foundation. 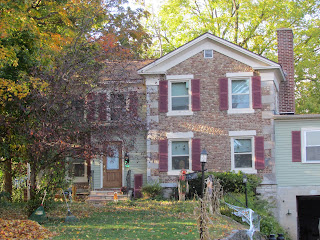 Another young family assembling a mailbox in front of their two-storey 1853 cobblestone Greek Revival (with newer additions) shared their enthusiasm for its maintenance.

Not surprisingly, there are a lot of Greek Revival homes in this area. The builders of c.18 public and domestic buildings in the US embraced the romantic spirit of "dignity, democracy and freedom" (ontarioarchitecture.com) inspired by the newly discovered architecture of ancient Greece and Rome, and identified with and emulated Greece's struggles to become a free republic.

In Cato, I had a close look at this recently sold Federal style cobblestone, the Savery house. The Freemans don't assign a date, but the original owner was a  major in the Civil War.

There are heavy stone lintels above the doors and windows, and the side-lighted front door sports two massive metal lion heads on either side.


The one and a half storey house at left, sporting its fall ivy beautifully (I wonder if ivy is a friend of cobblestone?) is also in Cato. The guide points out its multicoloured field cobbles, rough limestone lintels and quoins, and a freize. They were too polite to point out the disturbing asymmetry, with an extra bit at left disturbing the balanced 5-bay front, and the gable dead centre in the resulting facade. 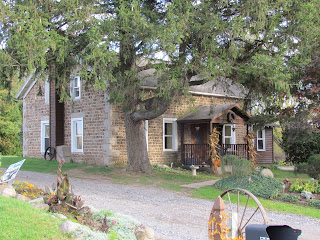 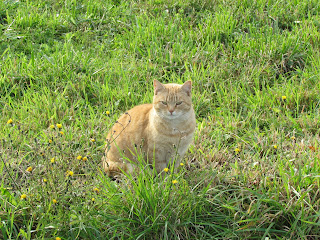 This farmhouse near Cato has had some modifications to chimneys, but it's an idyllic and well-loved country home. The guidebook explains that the cobbles are large, set on edge, with V mortar joints.


I noticed that the cobbles in alternating courses are laid with a slight tilt to left or right, creating one of the wonderful patterns cobblestone builders could produce.

I really connected with this enigmatic ginger cat in the field across the road, who didn't move a muscle as I darted about in the ditch, avoiding traffic, getting a good angle.

Finally, as the skies darkened on our way across country toward Oswego and the drive home, we found this lovely little house.

It's described as the Havens house, a small, square, one and a half storey cottage - the half  storey is hidden Regency-cottage-style, behind the heavy Greek inspired frieze, peeping out through slit windows. Sadly, it is showing signs of wear and may one day return to a pile of age-worn cobblestones.