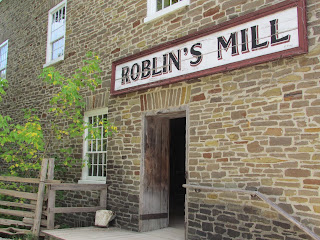 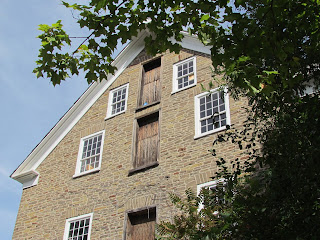 "...Ameliasburg village became the big city for me
I discovered the old ruined grist mill
built by Owen Roblin in 1842
four stories high with a wrecked mill wheel
cumbered by stones and time
containing the legend of the Roblin family
and Taylor from Belleville who took it over later
Inside the gaunt skull-like stone remnant
dangerous black holes in the floor
as if someone had plunged down screaming years ago
worn-out machinery and great millstones
carved with lovers' initials
some of the boards nearly thirty inches wide..."
(from In Search of Owen Roblin by Al Purdy, 1974) 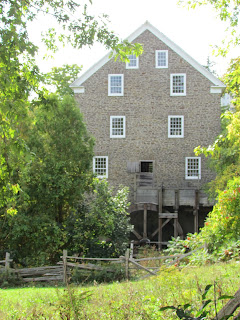 Anyone who might have visited my other blog 'In Search of Al Purdy' (now dormant), or who knows of my involvement in the APAFA at a local level for awhile, will guess how important it was for me to finally see that mill. Here's a post I did back in 2013 which shows some historic photos of the mill.

This is the mill which inspired Al Purdy to write his long poem In Search of Owen Roblin; it resurfaced lots more times in his poetry and  prose.

For me this place somehow contains the history of the Roblin family, of Al, his work, Prince Edward County and its history - mine by extension -  and the architectural conservation ethic which raised it from a dangerous relic in a disinterested village to the centrepiece of a living history museum.

In 1964 the original timbers, flooring and machinery were moved and set up at BCPV. The original masonry didn't make the trip to the city, and the replacement of soft old weathered limestone with something else creates a discord for me. Too crisp. 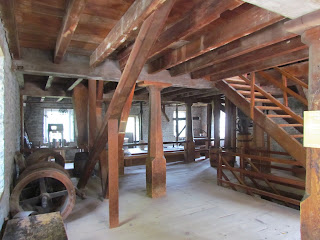 Somewhere I read (or did I hear him say it?) that PJS never quite forgave B. Napier Simpson Jr. for moving the mill from Ameliasburgh village.

In The Settler's Dream, Cruickshank and Stokes explain the necessity. "The tall chimney , of pink hand-made brick, towering high above the mills [belonged to the steam plant hastily built when the water supply from the lake slowed] came crashing down across the road early one foggy morning in the 1950s.
Edward was the last Roblin to operate the mill; he died in 1900. Several millers took it on subsequently, but by 1920, it had closed down. Plans to convert it into a canning factory were thwarted by the Depression and the obsolete building stood vacant for many years with most of its machinery still in place. In the early 1960s a serious crack in the masonry had developed and demolition appeared inevitable. The adjacent carding mill, with trim similar to the main mill, had already disappeared." (SD page 356/7) 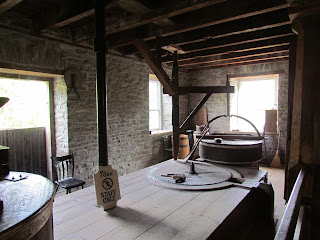 In its new job, Roblin's Mill tells the story of c19 village life and milling very well. But for me, it's Purdy's poem that brings the place and the time alive. I like this passage in ISOR recounting the deadlock which finally slowed and stopped the giant wheel: 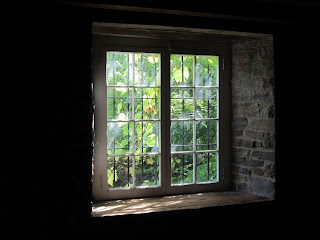 If you have never read Al Purdy's long poem In Search of Owen Roblin, you must. Aloud.

I once read it out loud to myself on Purdy day, seated with my back against Owen Roblin's grave marker warming in the April sun.

Found something good that has never left me.

Posted by Ancestral Roofs at 9:40 PM