Another Town, Another Train

"Guess I will spend my life in railway stations."
Nice line in a rather maudlin Abba song, which frankly, I don't even remember. But it's a way to start yet another post about railway stations.

When mon amour and I raided the history shelves at Berry & Peterson last summer, I finally succumbed to yet another Ron Brown book, The Train Doesn't Stop Here Any More (Broadview Press, 1991.)

Admittedly, I have regaled you over time with train station stops: Brighton's exceptional railway museum Memory Junction, Toronto, Kingston,
a junket along the Central Ontario Railway from Maynooth to Picton, Stirling, and Melville, Saskatchewan.

And I cannot promise this will be the last one. This is my journal after all. But I do appreciate you reading over my shoulder. At the risk of repeating myself, I thought Brown's notes on railway station styles were worth exploring.

The book has taken me on a rail-trip through my photo archives, remembering stations we have seen over time. 'Station Builders', the chapter on station architecture provides a neat organizing principle for thinking about their architecture. Brown explains how "a glance at a railway station's style will often reveal what region of Canada it was in, what railway line it was on, and even when it was built." 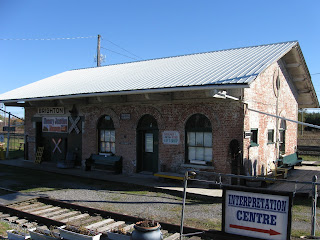 Seems the companies operated with the same motivation as the builders of banks, civic buildings - and even homes of the well to do -  image. Design made a statement about a railway company's financial solidity, inspiring confidence in the public. 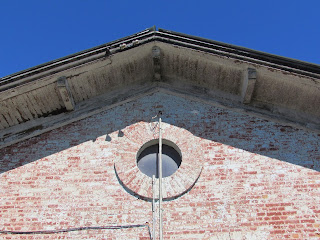 Brown tours the entire country, and the generations, noting style differences. Suggest you have a look before your next cross-country tour. An astonishing number have been lost, so look fast.

My takeaway from the book was Brown's account of the Grand Trunk Railway. He states theirs were the country's "first truly distinctive stations." And the motivation? To assure the sceptical public that the railway wouldn't be one of those cheap and nasty American companies, but a proper "first-class English railway." 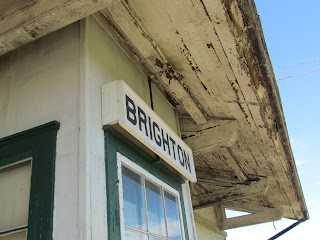 And how did the GTR go about this? They hired an architectural firm to build English-looking stations on their line between Toronto and Montreal. The "English look" used stone Romanesque arches (trading on the subliminal messages sent by the uncanny longevity and integrity of Roman viaducts and other structures.) We're fortunate to have several Grand Trunk stations in our neighbourhood.


Although most of the little stations were of stone, the Brighton GTR station (about which I have written numerous times, in its role as Memory Junction Museum) was built of locally made brick.

Napanee's limestone station displays the pattern: 5 arched windows (many, like these, filled in over time) and a door in the long side, 2 windows in the end wall. Roundel. Wide eaves with straight brackets.

Belleville's now-vacant stone heritage station with its six arches  (which, oddly, I have never recorded, but here's a peek) started out the same way, then grew a Mansard roofed second storey.

So many more of the same pattern popped up along the GTR lines. Picton, Port Hope, Prescott, Ernestown.  I don't know how many still stand. It will be a while before I get round to looking. In the meantime, this simply astonishing album of railway station photos should suffice. 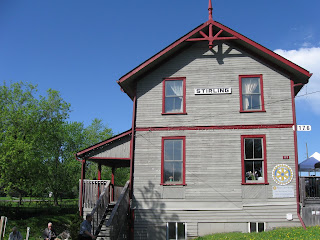 About halfway down the the album is a Jim Parker photo of the Stirling station, dated 1977.

Today it's a well-restored example of another company's venture into a corporate style, the Van Horne stations of the CPR. 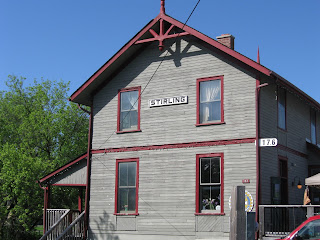 William Van Horne was the CPR vice-president in 1884 who inspired a standard look for their company's stations. The Van Horne station was a two storey structure, providing quarters for the station master upstairs from work. 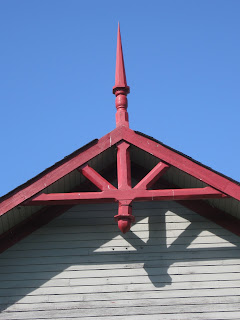 Brown states that this style was most common between Winnipeg and the Rockies. In fact, its other name was the 'Indian Head' style. This 'Vintage Everyday' site photo of the Indian Head station in 1884 shows the family resemblance to the station in Stirling.


I admit to getting hopelessly confused with the amalgamations, absorptions and demises of the country's railway lines. I'll leave that to my friend Larry. Me, I'll take stations for 2017, Alex.
Posted by Ancestral Roofs at 12:36 PM