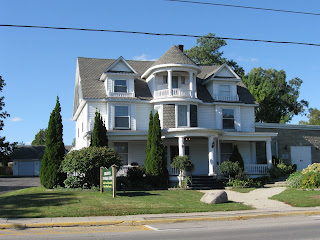 I love this frame house in Brighton. The good folks at Brighton Digital Archives report in their Heritage Homes list that the three storey frame house was built in the 1880s. The site identifies the style as Colonial Revival.  Here's a Colonial Revival source. Thanks Shannon.

My suggestion is that elements of Queen Anne Revival applied to a Georgian form provide the visual appeal here.  Seems to me that Brighton has a lot of transitional, vernacular builds combining elements of Victorian style and cleaner Edwardian lines.(More on its earliest homes later.) 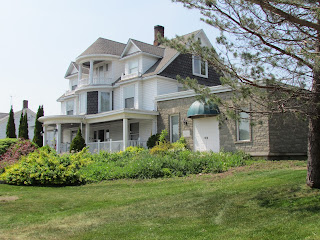 The uber-functional wing to the right serves in some official capacity; the home (so many large older homes fall into this line of work) is the Walas Funeral Home.


The Walas name is as well-maintained as this home. Canadian 'pioneer' Anthony came to Brighton from Poland in 1952, and to Brighton in 1972. He built homes, contributed to his community, and raised a family. One of his son has served as Mayor in recent years. 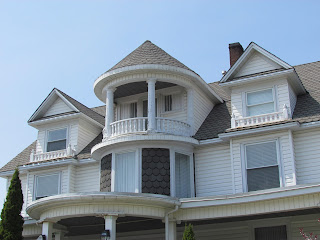 Shannon Kyles of ontarioarchitecture.com has this to say about fish scale shingle siding. "On Victorian and Queen Anne buildings, fish scale shingles were used extensively as a finishing element. These are generally wood and are most frequently found on the gable or upper section of the buildings."

Fish scale shingles were just one of the ways Victorian builders added texture and contributed to the general 'decorative excess' of the styles. No need to point them out. On the Walas building the scalloped shingles are highlighted with deep grey paint on the circular bay on the second  floor, quite effective against the white frame siding. Love the little turreted band shell verandah on the third floor. The circular portico with flanking verandahs at the front entrance are the other design feature which make this otherwise pretty ordinary three bay house an eye-catcher.


Here are a few other favourite fish scale tales.

While we're on the subject of wooden shingles (and their cousins shakes, which I read are split, not sawn) let's give a thought to shingles as an exterior wall cladding. The covering tends to be associated with New England Colonial building; not surprising to see it repeating in the UEL Maritimes, and in the Colonial Revival styles of 1900 on. 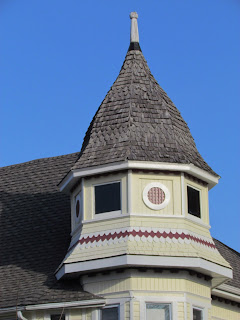 Shingles (and all sorts of other wooden elements, exposed structural and decorative,) show up in the Stick Style which seems to me is is Queen Anne writ in wood.

Then there are the medieval roots of building styles. Elements of the rustic building methods of  the medieval period were reprised in Victorian era stick-style architecture, and in the later Arts and Crafts style, and even later 'organic architecture' of Frank Lloyd Wright.

But for now, I'm going to stop playing the name game, and just appreciate why I loved these buildings enough to record them. 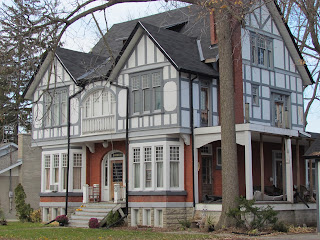 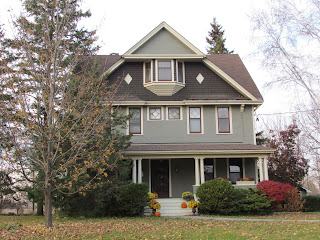 P.S. And then, just because they were available, no thought for their silvery beauty, shingles adorned many a shed on farms everywhere.

Posted by Ancestral Roofs at 11:15 AM