Paddle to the Sea 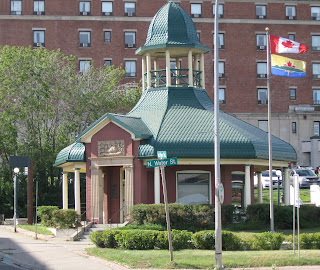 I've written about Thunder Bay's downtown on occasion after past trips to Lake Superior. In March 2012 I commented on the stone carving in this peculiar little tourism kiosk, the Pagoda. In December 2013 I featured its Victorian form with the Postmodern Province of Ontario building looming over it.

So, it would have been rude not to pop by to pay our respects when we had a day-trip to the city in August. Across the street the 1905 Railway Gothic CNR station still stands (good news) but it's under-utilized currently. We have hopes for its full adaptive reuse, given the creativity which surrounds it, at Prince Arthur's Landing, the impressive waterfront redevelopment which has transformed the former working waterfront.

We were drawn to the lake. The laconic individual at the Pagoda pointed us in the direction of a rather awful graffitied and littered elevated walkway over Water Street. We persevered, dodging skateboarders on the ramps, and were amply rewarded for enduring the 'eww' moment.

The first building I spied was an arts centre, with a nice gift shop, and open spaces for exhibits, events and workshops. Turns out, the Arts Centre and Gift Gallery is housed in the old freight shed. You can see the original functional building at left, complemented by an appealing modern section with bright wood accents, glass, and overhanging eaves on pilotis.  More on its artistic mandate here.

Visible in the photo above is the low concrete wall (decorated with subtle low relief sculpture, a trickle waterfall representing the Red River - interpretation provided) supporting a garden space called the Elliptical Garden, with native grasses and interlocking stone designs.
From this elevated vantage point you can look toward the former 1905 CNR station and absorb its history in interpretive plaques at just the right spots.


The CNR station is described in minute detail in this heritage registry document. A quick look will ascertain the key elements. The term Scottish Baronial leaps to mind; subgroup Railway Style. According to the document, this style was a uniquely Canadian idea for railway stations around 1900.

Would love to know who sculpted the friezes. (I'm currently reading And Beauty Answers by Elspeth Cameron, about nearly forgotten 1920s/30s Canadian classical sculptors Florence Wyle and Frances Loring - fascinating how the sculpture of the era, and those who created it, have been forgotten. So I'm sensitive to these things.)


Even the CNR architect got a mention in the heritage document. He was Ralph Benjamin Pratt (1878-1950.) 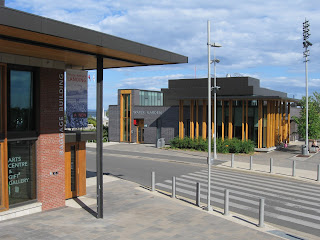 From your spot in the Elliptical Garden, you can turn from your contemplation of railway history to face the lake, and an appreciation of the verticality of the Water Garden, a stunning glass, wood and steel structure clearly designed to play nicely with the Baggage Building addition across the street. This community space houses a cafe, a change area (with welcome WiFi) with a splash pad/skating rink outside, very popular with the wee people on the very hot day we visited, so, no photo. The development continues through the former gritty docklands creating an absolute treasure of a public access, multi-purpose waterfront redevelopment. Getting close to the water was the mandate. Fulfilled.

I'll post about the city's committment to public art, and to the Spirit Garden honouring First Nations tradition in another post. But should you like to read ahead, here's a link to a presentation with some great photos.
Posted by Ancestral Roofs at 12:35 PM