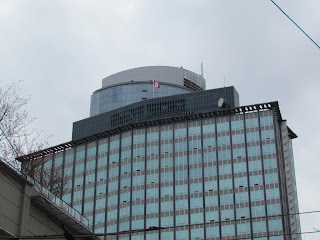 This handsome mid-century modern giant was part of my neighbourhood when I lived in a rooming house on Nelson Street in Vancouver in 1973. The geometry, the use of steel and concrete, its distinctive lozenge shape designed by architect Otto Safir, are so mid-century. The building stands at the corner of Burrard and Nelson Streets, at the top of the climb up the Burrard Street hill from downtown, cooly aloof from the two Victorian stone churches at the same intersection. 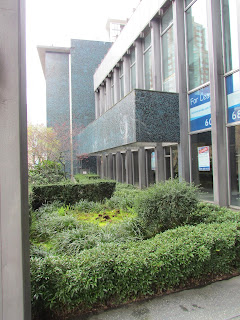 This past April, we were astonished to see that my old building, an Edwardian with Tudor affectations, was still standing. But not for long, as developers were clearly coveting the house, the church coffee house to its left, and the spruce-bordered parking lot to the right, just behind nearby First Baptist Church, off camera, but visible here. 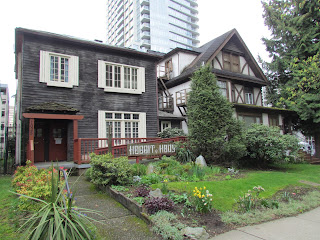 Having grown very fond of mid-century design in recent years, I was longing to have a look at BC Hydro,  firstly to establish that the 21 storey structure still stood at the corner. Indeed, it’s there, but it's no longer a giant in Vancouver's exploding downtown. An obscene 63 storey structure born of a notorious businessman has bullied its way to the top. 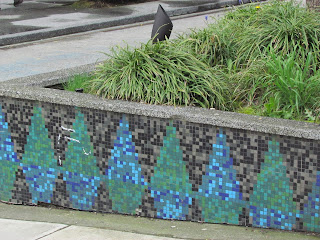 But my primary reason for spending time here was to enjoy once again beloved Vancouver artist B.C. Binning's sea blue/ forest green/rock grey mosaic tiles, which create a cool reception in the modernist entry. The reception areas, with low planters and terrazzo inside and out, were still sparkling clean as the lines which distinguish it.

For more B.C.Binning, here's a link.

For more architecture, it is a delight to be able to direct you to the Historic Places description of the 1955-7 B.C.Hydro Building. 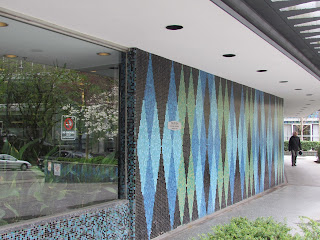 Posted by Ancestral Roofs at 1:10 PM