A dear friend who once worked as a school secretary used to play Alice Cooper's (pretty awful) School's Out for the Summer at high volume over the school PA system, as part of the 'announcements' on the final school day of the year. Now the chaos of that song probably added nothing to the already feverish pitch of excitement as kids savoured the prospect of summer freedom, but I like to think of that story on the final day of school each June.


This, however, is a peaceful school story about a bucolic spot, my homage to the last day of school, and to educators (and students) everywhere who have toughed it out this year. 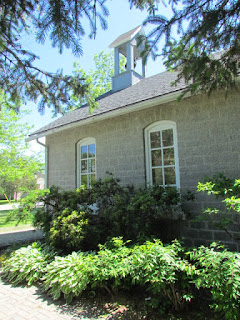 My school story came about after an Ancestral Roofs reader contacted me, to invite me to tea and a tour of her new old schoolhouse in Wilton, Ontario. The limestone schoolhouse was built in 1871, but was closed about a hundred years later. Jude has created a comfy home in the back addition to the schoolhouse, with a sunroom overlooking gardens and a pond, and transformed the bright open space of the original school into an open family room decorated with schoolhouse memorabilia.

And on the day after labour day in September, Jude will ring the still-functioning school bell in the refurbished belfry, in memory of her international teaching career, and in honour of kids and colleagues once more returning to school.

This is fun. Bless the researchers who daily recreate our past for us.
Posted by Ancestral Roofs at 5:39 PM