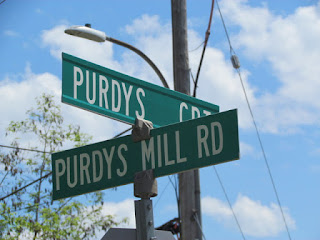 Long a devotee of the poetry of Al Purdy, and a former busy local A-frame volunteer and member of the APAFA board, I prick up my ears when I see or hear the name Purdy. Should you have read In Search of Owen Roblin, Al's very evocative long poem about Ameliasburgh and its history, you would remember that he traces his roots back to Gilbert Purdy:
"Back here at home on page 263/of Pioneer Life on the Bay of Quinte/the names of Gilbert Purdy and his eight sons/who were also at Adolphustown with Van Alstine/as well as Philip and Owen Roblin/Barnabus Day and Michael Grass..." (from In Search of Owen Roblin)

For a couple of years I produced a blog titled In Search of Al Purdy, a kind of literary tour of places Al mentions in his work. Here is a post from May 2013, in which Al ponders Roblin's mill. 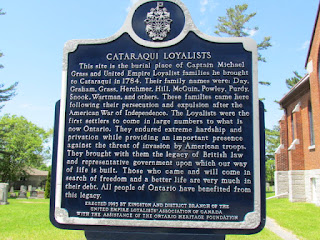 In Cataraqui not long ago, I investigated the Purdy story. I had noted Purdy's Mill on my road atlas and looked for the signs as I walked the village (never would have picked it up while driving crazy busy Princess Street/Highway 2 as it chicanes down a hill and across Cataraqui Marsh to 'the city.' In recent years the corner has grown up into an almost exclusively vehicular neighbourhood, and a pedestrian, most especially one with eye to viewfinder, can come a cropper. 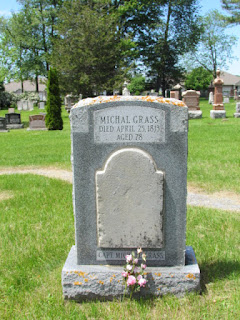 Outside the Cataraqui United Church (built as a Methodist church in 1881) I noticed the historic plaque telling the Loyalist story. In the churchyard, I came across the marker for Captain Michael Grass, who in 1784 led 50 Loyalist families to Cataraqui, out of which grew Kingston. 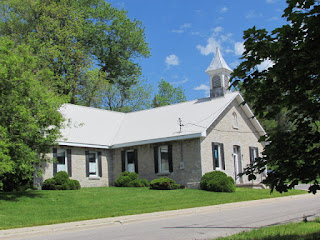 I crossed a parking lot and entered Purdy's Mill Road...and history. The short road felt like it had been bypassed long ago. All around buzzed the noise of the city, but here, not a vehicle passed as I trudged beside the wild ravine above what I suppose was a creek which would once have powered the mill. 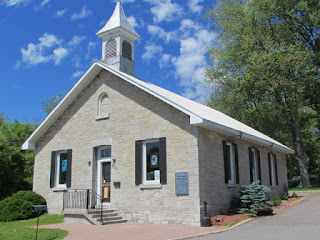 MargaretMcBurney and Mary Byers wrote a chapter on Cataraqui in their 1979 volume Homesteads. The village was once called Waterloo; its population peaked at 300 in the 1870s. It had "a town hall, church, stores and inns" and the 65 acres of cemetery which still provides refuge to living and deceased today.

The limestone schoolhouse with its simple cupola has no datestone, but the fine stonework compensates. 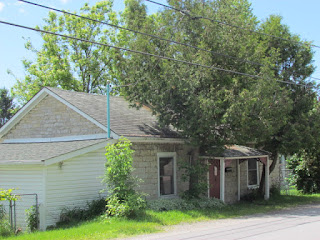 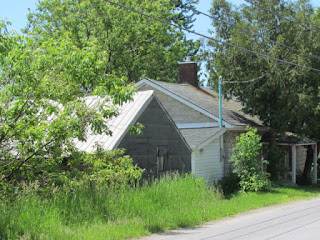 The small houses along the road would have been for mill workers; despite some new cladding, the native limestone is visible here and there. The cottages cling to the edge of the ravine cloaked in trees and underbrush. 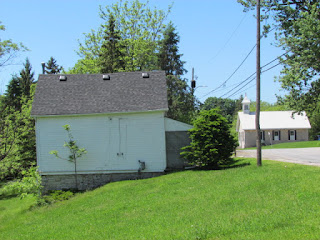 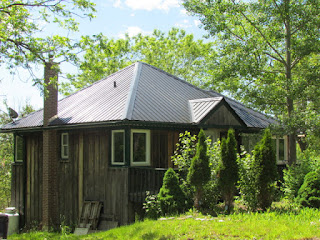 I expect that this board and batten clad hip roofed home cottage (the one with the exuberant rooster) was also one of Purdy's mill cottages.

At the end of the road (where heavy equipment was hard at work creating another subdivision) stood Purdy's Mill, operated by Micajah Purdy, one of the descendants of Gilbert Purdy Jr. whose family settled here and along the Bath Road. Years ago, I wrote about one of the Bath Road houses in a post. 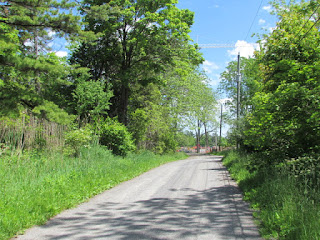 Here's a great article from the Kingston Whig Standard about the village history. The writer quotes a City of Kingston report on village activity in 1846: " three physicians and surgeons, a carding machine and fulling mill, cloth factory, asher, tannery, store, three taverns, three wagon makers, a saddler, two blacksmiths, two shoemakers, one tailor and one baker."

Later, "a sleigh-maker...post office, confectionary, a fanning mill factory [and] a mason" added their talents to growing the village. I love this spot; have more to share in another post.

Posted by Ancestral Roofs at 4:30 PM