It's what's outside that counts - the facts on faux 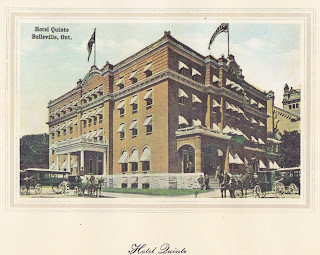 Belleville has been doing a lot of reminiscing lately about its personal connection to the great Hotel Quinte, which we lost to fire before Christmas. I've done several posts about it, and anyone with a google can find dozens of media reports.

I'm just here to talk about pillars for a moment.

The most recent version of this hotel was reopened after an earlier fire, in 1907. The press of the day, given to hyperbole, described the sumptuous interior and its appointments. Newspaper reports describe the Etruscan and Macedonian marble pillars in the rotunda and dining room, with great enthusiasm.

With colleagues from Heritage Belleville, our local municipal heritage committee, I toured the interior in early spring 2011 and took these photos of the lobby (called the Rotunda in the days of spitoons, public writing desks and ladies' entrances.)

The pillars drew my attention. Not only was their surface slightly roughened, as if by brush-strokes, it was room temperature, not the cold I associate with marble. And there were nicks and building scars where a desk had been removed and those breaks in the surface revealed... white plaster. So, faux!

All that glitters is not gold. There were certainly some fine plasterers in the day, although I wonder if some of this cornice detail might have been pre-cast.

I have heard these marble mosaic floors described as Italian marble. I have even read that Senator Corby, one of the consortium of men who built the hotel, imported the Italian marble and the marble-worker to do the job. Then on the weekend, at the Historical Society/Archives outstanding display of historical photos and facts, I saw the words "Vermont marble".
One very fine story about the Hotel Quinte rotunda was the real thing - real dedication, real love of the place and its history, real hard work! During the hotel's final year, before it fell into the hands of the receiver, dedicated manager Angela and her team tried very hard to capture the hotel's history and charm. One of the projects was the removal, by heat and hard labour, of carpeting that had been glued over a section of the marble mosaic floor in the Bridge street side of the lobby, which greeted patrons as they entered through the majestic south portico, removed and blocked in the 1960's (the entrance at the right in the post card at the top of this post). The words 'Hotel Quinte' and the design  which continued that of  the main lobby and halls, was revealed. For a little while.

And those pillars?
Greg Pinchin of Belleville's planning department, who serves as staff support to the Heritage Belleville committee, took the two photos which follow. One displays the nicks in the 'marble' of one of the pillars. The other view, available, sadly, only after the fire, shows one of the square pillars, and its decidedly un-marble interior.


Posted by Ancestral Roofs at 5:12 PM