The black and white photo below of Picton's once-upon-a-time Rickarton Castle was taken by Rodger Greig and published in the Spring-Summer 1990 issue of ACORN, the ACO publication. 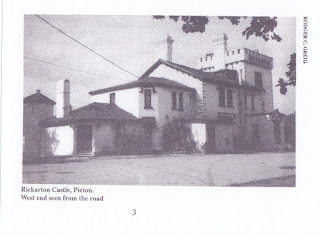 He explains the building's evolution: "[it] must have started as a simple symmetrical box of a house, but just before 1863 it developed the trappings of a castle: a massive square tower at one end and plenty of miscellaneous rambling additions at the other, crenellations along every roofline and shapely Tudor gothic verandahs in back to look over the harbour."

I recorded his comments about its chances for survival in a post on January 9.


Picton's second castle after Villeneuve, the home was originally called Warwick House by Colonel Rylands who did the gothic facelift. A cut above your usual house, it was sold for a boarding school in 1866, then bought by shipping magnate Arthur Hepburn who renamed it Rickarton to recall family estates in the old country.


Sadly, it's remembered by most folks in town as a pretty divey beer parlour. Went there once, had a great reunion with a local cousin, when we were home on a visit from the west. Felt odd, though, like being a tourist in my own town.

Warwick/Rickarton met its end sometime in the roaring '80's. A developer had purchased the land, discovering too late that there was an historic building on the site. (I am trying to emulate Greig's famous sarcasm here). Unfortunately, the building did not fit with their plans for a development site, so it had to go. You understand.

The alternative would have been to make it the centrepiece of the housing estate. But that's seldom a solution...stripped of their property, surrounded by new builds, homes like this become anachronisms.


But lest I be accused of tying myself to every old building, I offer this bit of wisdom from Harold Wilson:

"He [and, I assume, she] who rejects change is the architect of decay. The only human institution which rejects progress is the cemetery".

Be sure to venture below to the comment by a visitor to the blog, who has special recollections and memories of one of Picton's lost castles.

Posted by Ancestral Roofs at 10:49 AM