As I continue to mine my cache of decades-old issues of ACO's ACORN magazine, I find myself back amid a heated debate about "facadism," which appeared to arrive on the heritage conservation scene in the 1980's. I do recall that being a time of burgeoning development - the first wave of gentrification in my home county seemed to begin then. Facadism is a conservation approach whereby the historic front of a building is retained, while the interior and back (and stories above it) are reconstructed with modern methods and creature comforts foremost.

The judgement of Solomon in these cases is - "well, we'll keep the front, or nothing at all." Faced with a choice like this, I can see where a compromise gets reached between heritage committees and development-inclined city councils.

Some utterly ridiculous situations arise.
This photo of the former Wood-Gundy building grafted onto a modern structure would be silly if it weren't so sad.

And from the 'Wish I'd Said That' department:
Torontoist, a clever Toronto blog, dubs the practice facadomy. Their posts from September 17, 2007 and August 30, 2007 provide lots more material on this set design approach to cityscapes.

A few good solutions have been reached over time. The refined Smith Block in Port Hope (right) has been described by no less a personage than Tom Cruikshank as "a viable solution to a serious problem." In this case, the facade was so important to the context, the famed historic district of downtown Port Hope, that facadism was the only answer after a fire destroyed the structure behind. The website of HeritagePortHope provides the full happy story.

The sad fact remains that although irreplaceable and wonderfully detailed architecture is retained, we lose the experience of walking into an historic entry, seeing out through historic windows, rubbing our hands along old woodwork, absorbing the ambiance of another era.

This issue confronts us today, perhaps more than ever, as we seem to be in another growth spurt, especially in areas closer(and in)  to our large cities.

Earlier this month I recalled the controversy about the former 'Cablevue building'. The original design for the development of that site was an example of facadism. Looking back, we would have been happy with that! 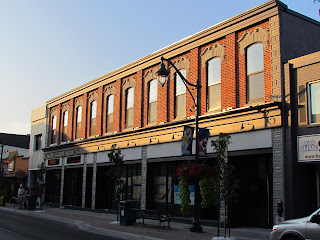 There's a good recent example in Trenton. This building which anchors downtown Front Street was recently refurbished. The facade with its unique moulded concrete lintels and quoins was retained. Storefronts are tasteful modern glass and dark surrounds. The back is functional new construction.

Personally, I like it. It's part of some great downtown revitalization going on in that town. Riverfront walk, downtown marina, large park, great library...getting to be a pretty good town. 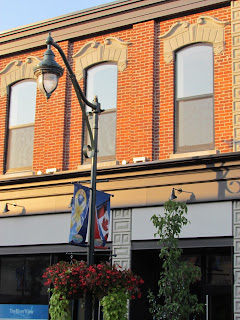 And these days as we contemplate the burned out shell of part (and the least interesting part) of our old Hotel Quinte, this approach to building conservation has to be on our minds.


Posted by Ancestral Roofs at 3:30 PM